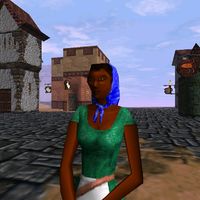 Mariah is a Redguard gardener who can be found near the Mage's Guild and Temple of Arkay. As Stros M'Kai's landscaper, she carries a watering can and beautifies the park adjacent to Gerrick's Goods. She admits that she is a Crown, but unlike most of them she has no negative opinions about the Forebears or Empire.

Mariah says that Brother Kithral used to visit the park and stare at the waterfall, but she hasn't seen him recently. She is also one of four people who you may hear about the Smuggler's Den from, the others being Gerrick, Prnell, and Siona.

"What do you think you're doing with that, boy? Put it away right now."

"Change you back?! That's quite beyond me, sweetkin. Find a wizard for that."

"That's very sweet."
"Oh, my. What happened then?"
"You'd better get back to the caves, my dear, before Hunding sees you. You'll be turned to stone!"
"What was that, dear?"

"Do you know of a woman named Iszara?"
"Used to see her around. But that was a while ago. Last time I saw her --
"Mnnn... She was headed toward the Cartographer's. Never saw her again --
"...And that was three months ago if it were a day."

"Any idea how I can get into the Palace?"
"Richton doesn't take to uninvited guests, and there's no way to sneak in that I've heard of."

"What do you know about this Restless League group?"
"They scare me, frankly. They've been around since the days of Thassad, and no one seems to know much about them.
"They seem to remain as quiet as possible, not like your usual pirates, there's something else to them."

(Unlocked after escaping the Catacombs)

"Any ideas how I can get in contact with the Restless League?"
"You could try the Smuggler's Den, I've seen them there from time to time."

"And what does life hold for you in Stros M'Kai?"
"Not as much as it used to. Spend my days landscaping. Before the civil war there were more of us. The town square and park were so beautiful. But I do what I can."

"I'm surprised Richton even allows such a practice to continue."
"City beautification may not be one of Lord Richton's concerns, but he still needs to put on the right airs, should his Emperor, Tiber Septim, ever check up on him.
"All leaders like their gardens full and the smell of success in the air."

"Wars have never been good to a city."
"Especially not this one. First A'tor and the Crowns defeat the Forebears, then the Empire comes rolling in... It's too much for these walls to handle."

"I can only assume you are a Crown."
"That I am. Though not as passionate as many others. I'm glad the war's over really. Life goes on and times change. I'll try to keep our sweet city as fair as she can be."

"You sound as though you bear no grudge to the Forebears... or the Empire for that matter."
"The Forebears claim to be the earliest descendants from Hammerfell, while the Crowns trace their lineage to the first rulers.
"It's been that way for generations. And Tiber Septim tries, where many have failed, to unite the world of Tamriel."

"The Cartographer's? I wonder what she would want there?"
"Hopefully she was just seeing Maiko, the mapmaker, and not the boys in the Smuggler's Den below."

"Where's the park?"
"Over by the waterfall! I'm ashamed you didn't notice... I'll have to spend more time on it. People really do enjoy it, especially that Arkay boy, Kithral."

"What were you saying about Kithral?"
"He's one of the temple members. Loved the park. Would stare at the waterfall and write in his journal. Passionate Crown, that one. But now that you mention it, I haven't seen him in months."

"What do you know about this Smugglers Den?"
"Below the Cartographer's. I've seen all sorts coming in and out of there, even so-called 'League members' from time to time. I hope Iszara didn't end up there."

"You wouldn't happen to know the password to the den, would you?"
"Oh no. I stay far away from that sort of trouble."

"Mariah, do you know anything about the Flask of Lillandril?"
"Only the tales. Lost on the island by elves long ago. A treasure hunter's dream."