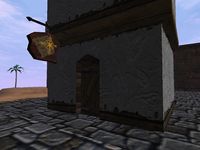 The Cartographer's is a shop in Stros M'Kai, located in the southeast corner of town, east of the Mage's Guild. Maiko spends his time here drawing maps that depict various places on Nirn. Behind the Cartographer's there is a set of stairs leading down to the Smuggler's Den, in the building's basement.

The interior of the Cartographer's is a single room filled with maps. Two maps of the Summerset Isles are laid out on drawing boards against the south and west walls, and another is displayed on the west wall. Two more maps are displayed on the south wall: one of Hammerfell and the other of Nalonga and Ravan.

Maiko keeps several rolls of parchment for new maps in a container in the southwest corner, and two more on the shelves against the east wall. These shelves also hold a row of books, some quills, and two other items presumably used in mapmaking.