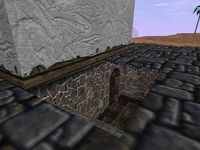 Entrance to the Smuggler's Den

The Smuggler's Den is a room underneath the Cartographer's, where Urik runs a smuggling operation. Most people in Stros M'Kai know about the Den, but few know the password required to enter. Lakene and Rollo played cards there, and Lakene lost his wife's silver locket while gambling. If you get it back for him, he will tell you the password is "spoon".

Iszara went to the Smuggler's Den before she disappeared and traded her League insignia for a piece of malachite. Urik says he does business with the Restless League, but they haven't been seen in weeks. Still, he will be hesitant to give up the insignia, and you will have to persuade, pay, or fight him to get it.

There is nothing much of interest inside except for Urik. A table with a few bottles and mugs is on the left as you enter, and on the right wall is a wooden board with two knives stuck in it. Baskets, boxes, sacks, and barrels clutter the rest of the room.