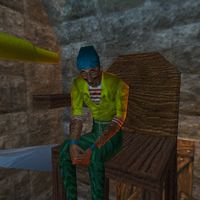 Prnell sitting on the tall chair

Prnell is the slightly blind telescope operator in Stros M'Kai. The old man lives in the Harbor Tower and is always found on the upper level of the southern tower. He sits on a tall chair, positioned so that he can look through his telescope. Together with Favis, Prnell works to signal the arrival of ships in the harbor. When he waves the flag, Favis knows to ring the bell in the Bell Tower.

Prnell can see more clearly with his eyepiece, but he misplaced it when trying to fix the bell for Favis. If you return it to him, he lets you wave the flag, which may be useful to distract Rollo during the quest Contact the League.

He is one of four people who you may hear about the Smuggler's Den from, the others being Gerrick, Mariah, and Siona.

When you attempt to pick up the flag from the ground:

"Hey, sonny. Where do you think you're going with that?"
"Do you think I could borrow your flag for a minute?"

If you have given him his eyepiece:

If you have his eyepiece:

"Prnell, I found your eyepiece. Here you go."
"Well glory be! How can I ever thank you, Cyrus my boy. I know! I'll let you wave the flag.
"It'll be our little secret, eh? Go on, take it! Taaaake it. An opportunity like this don't come along every day."
No

"Thanks Prnell, but maybe some other time."
"Suit yourself, my boy. But you don't know what you're missing."

"All right, I think I'll take you up on that."
"That's the spirit! You'll soon see what I'm talking about. Nothing like it, I'm telling you!"
(Receive flag)

If you have flag:

"Here you go, Prnell. Thanks for letting me borrow it."
"Of course, Cyrus my boy, of course! I wasn't pulling your leg about the flag, was I? Makes life worth living, even at my age."

"Do you know my sister, Iszara?"
"Iszara? And you're Cyrus, her brother! Of course. Probably look just like her, too, would've seen the family resemblance."

If he doesn't have his eyepiece:

"But without my eyepiece, I'm afraid I can't get too good a look at you. You know, I haven't seen Iszara around in quite some time."

If you have asked about the Restless League, followed by:

"Wait a minute! Maybe the Restless League is after you, too. I wonder what Iszara could have done to get them so riled up?"
"Too' [sic]? Do you mean the Restless League is after my sister? Why didn't you say so before?"
"You never said she was missing, Cyrus. This was months ago, anyway, and my memory ain't what it used to be.
"As I was saying, couple-a them boys came around, asking about her, but not respectful, like you. Gave me the hairy eyeball, trying to scare an old man.
"Don't believe anyone has the right to talk to me like that! No wonder they have such a bad reputation."

"Have you heard of a group called the Restless League? My ship was attacked by a couple of them on the way here."
"That was you? I saw the whole thing, through my telescope you know. Not much of a battle, though. Ha, you really gave those ruffians what for!"

If you have asked about Iszara and he doesn't have his eyepiece:

Same as above (If you have asked about the Restless League)

"How does the city fare with the Imperials in charge?"
"I got nothing to tell you that you can't hear from anyone in town.
"This was the heart of Crown resistance, but look at it now. When you lock up every Crown or League supporter, it don't leave much."

"What are you watching for up there?"
"Ships, sonny. I let the town know when a merchant ship is coming into port.
"Remind me of my seafaring days, a bit, watching out from the crow's nest, but now I'm stuck with this job!"
"How come?"
"Cause ships are about the only thing I can see! I lost my eyepiece around here somewhere and the spyglass here's no right alternative."

"What did these Restless League fellows want to know?"
"Just if I'd seen Iszara, let them know if I ever did. Ha! Like I'd tell them anything, after they come in here all threatening-like.
"Seemed to think she'd stolen something from them. If that's true, no wonder she's disappeared. Either they found her, or she's makin' sure they don't."

"I thought the Restless League was outlawed. How would you contact them?"
"You'll find out soon enough, the Smuggler's Den is hooked up with the League somehow.
"Not directly, or it'd be out of business by now, with Fatboy on a rampage. But I'm sure they could still get in touch with the League."

"Where is this Smuggler's Den?"
"Under Maiko's shop. But it ain't that simple. No one gets in without a password."

"What kind of reputation does the League have?"
"Terrorists, pirates, all that. No doubt about it, they ain't to be trifled with. Fatboy found that out himself. But then, the Empire don't like to be messed with either."

"The League is fighting against the Imperial occupation?"
"They were. Not openly, like the Crowns, but that's never been the League way. Blowing up Richton's flagship, more in their line.
"Watched it burn from right here, an amazing sight. But what did it accomplish? The Empire's still here and I haven't heard hide nor hair of the League until today."

(Unlocked by "Contact League" or "League Reputation" if unfamiliar with term; disappears once asked)

"Fatboy? Who do you mean?"
"Right, you're new in town. Haven't been introduced to Governor Richton."

(Unlocked by "Iszara" or "Watch Tower")

"So you can't see without your eyepiece --"
"I can see the galleons and spice-traders just fine with this spyglass! But other than that -- I mean, I can't very well walk around town holding a telescope up to my eye."
"It might be kind of funny, though."
"I'm laughing even as we speak. Could you maybe find it for me, lad? It's a strange kind of loneliness when the beginnings of yer vision's at half a hundred yards."

If you have his eyepiece:

"I think I may have found your eyepiece. Is this it?"

"Favis is a friend of yours?"
"Ha! He'd like to think so. Damn nuisance is what he is. Always whining about having to ring the bell.
"Just yesterday he had me down there, complaining it was broken. 'It don't ring as loud as it used to, Prnell'. Sure! Old goat's as deaf as a post, that's the only problem."

"Why does Favis ring a bell?"
"To let everyone know the ship's here, of course. What do you think, I just shout out across the rooftops?
"When I see a ship, I go out on the walkway and wave my flag, so Favis knows to ring the bell. There's nothing quite as satisfying as that.
"Kinda makes you feel like a god, waving that flag and listening to the bell ring out over the whole town. A pity I can't let you try it, but we don't get too many ships in port these days."

(Unlocked if you have given him his eyepiece)

"Do you think I could borrow your flag for a minute?"
"I really shouldn't, but ... all right. I can't help it, I just like to make people happy!"

Response to Cyrus for the topic "Eyepiece", if you have his eyepiece: