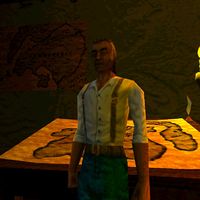 Maiko in the Cartographer's shop

Maiko K'Elmar is a man who works at the Cartographer's on the southeast side of Stros M'Kai. He can make a map for you from notations in the book Elven Artifacts vIII, which partially reveals the location of the Flask of Lillandril.

Maiko offers to create the map only if you let him keep the elven book. It will take about 40 minutes for him to finish this task, and his usual conversation topics are unavailable until he is done. He claims to know nothing about the Smuggler's Den under his shop.

"No weapons in here. Put it away."

"Get down from there! What is the matter with you?"

After talking to him:

"Good day. I'm Cyrus."
"Aren't too many youngsters around these days, specially not as well-spoken as you. I'm Maiko, the local cartographer. How can I help you?"

If the last topic you asked was "Elven Ship":

"Maiko, can I talk to you for a minute?"
"No! Bah! You and your precious elves! Begone!"

If the map is finished:

"Maiko, is my map ready yet?"
"Yes, here it is. Whoever made these notes was obviously a trained cartographer, probably of Mandri's school, judging from the transverse error correction measurements.
"May this map serve you well, young sir."
(Receive map)

If he is working on the map:

"Do you have any maps for sale?"
"Sorry, I don't sell retail. Contract work only. But perhaps I can make a map for you?"

"No, thanks."
"Very well. Please let me know if I can help you with anything."

(Unlocked if you don't have a map)

"I could use a map of the island."
"I used to make those, but I can't compete with the big Hammerfell cartography houses. Hire beggars and street urchins to copy off a master map.
"You've probably seen their cheap city maps around. Nothing like a good hand-drawn map, but people don't seem to care about craftsmanship anymore."

(Unlocked if you have the book Elven Artifacts vIII; disappears once "Book for Map" is asked)

"I wonder if you can make anything of this. These look like map notations to me."
"Let me see ... Oh, bloody hell. This again. J'ferr [sic] must have sold this annotated copy of Elven Artifacts ten times.
"And they always end up here -- can you make me a map? They say. Why is everyone so mad over lost elven treasure? I'm sorry, but I'm afraid I'm too busy today."

"Very well."
"Thank great Arkay! Sometimes I think if I hear one more word about elves I'll go crazy! Not like there aren't plenty of other interesting mysteries around Stros M'Kai."

"I'm willing to pay for the map. Handsomely. Just name your price."
"Persistent, eh? Listen, if you'll give me the book, I'll make it for you. One last time, free of charge. At least then I won't ever have to see it again."

Opens same subtopics as "Make a Map from the Elven Book".

"What are people talking about around town these days?"
"Damning the Governor's eyes, mainly. I try not to get involved in all those troubles. I've seen more than enough suffering in my life. I just want to spend my last days working with my maps."

"I wonder if you've heard of the Restless League?"
"Hmm ... The alliance between Daggerfall, Wayrest and Balfiera against the Cyrodiils during the First Era? No, no, that was the League of Unrest ... Sorry, I'm not familiar with it."

"Do you know a young woman named Iszara?"
"I'm afraid not. I don't know too many of the youngsters around town these days, you see. I prefer to spend my time with my maps."

"What do your maps tell you?"
"Maps are like people, did you know that Cyrus? There are good maps, bad maps, indifferent maps.
"You shouldn't trust most maps, they'll lead you astray if you give them a chance. An honest map is rarer than a true friend, remember that, young sir."

"Is life under the Imperial Governor so harsh?"
"I said I didn't want to speak of such things."

Make a Map from the Elven Book[edit]

(Unlocked if you answer never mind to "Elven Artifacts Book")

"I wonder if you can make a map with this book. I'm willing to pay for the map. Handsomely. Just name your price."
"Persistent, eh? Listen, if you'll give me the book, I'll make it for you. One last time, free of charge. At least then I won't ever have to see it again."

"Sounds good. When will the map be ready?"
"Come back in a little while. I'll see what I can make of it."

"I'd rather hang on to the book. Can I just pay you to make the map?"
"You're not listening, are you? Elves, elves, elves! Is that all you can think of? What do you know about the Flask of Lillandril? Did the elven ship really wreck on Stros M'Kai?
"If it doesn't have to do with elves, no one's interested. Well, I for one am sick of elves and their oh-so-mysterious ways. Bah! Don't get me started."

"You say the flask arrived on Stros M'Kai in an elven ship?"
"What did I just say! Out! Get out!! Stop asking me about the damn elves!"

(Unlocked by hearing about it from Gerrick, Mariah, Prnell, or Siona)

"I've heard tell that your basement is used as a Smuggler's Den."
"Really? How about that? I rent the downstairs to some local lads. They're quiet, and always pay up on time. I can't imagine they're up to anything illegal."

"These local lads ... Do they have names?"
"They never said. Perhaps you should run downstairs and ask them yourself."

"Have you ever heard of the Flask of Lillandril?"
"Hunding's bones, of course I have! Treasure hunters come here from all over Tamriel, digging and poking around interminably.
"They say there's a treasure map floating around somewhere, but I don't believe it."

"Why not?"
"If there were a real map, why hasn't someone found the flask by now?
"Such a waste of time and effort, lusting after a mythical elven flask, when the island is full of real mysteries."

"What do you mean?"
"Well, the caverns, for instance. Haven't heard of them, have you? Or the Dwarven Ruins either.
"But they're real, young sir, and as full of mystery and adventure as you could ask."

"Where can I find these caverns you speak of?"
"That's the question, isn't it? Won't find them on your cheap commercial map, will you? That's a real mystery for you to ponder."

"I don't know much about Dwarves. I always thought they were mythical creatures."
"See what I mean? Not myths! Real, as real as stone and metal. Who do you think built those ruins?
"All gone, thousands of years ago, and no one knows why. But that's a whole nother story. What were we talking about again?"

Maiko was supposed to have a topic possibly called "Iszara Was Here", and likely unlocked by Mariah: "Iszara":

"Mariah told me she saw Iszara headed this way. Don't test my patience. What do you know!?"
"Cyrus! Please, I haven't seen her! She may have other contacts over here, but I know nothing about it. I try not to ask questions. Please, leave me to my maps."