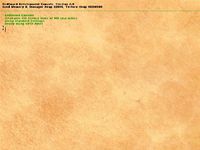 The console is an in-game tool in Redguard that gives you access to various commands. Among other things, these allow you to set flags which control the progress of the story, modify attributes of objects, add and remove items, and fast travel to various places. The console can be opened in-game or on the main menu using the F12 key. Use the up and down keys, as well as the page up and page down keys, to view the console's command history.

The most useful commands, which correspond to the actions mentioned above, are setflag, object, item, and load. All commands have a shortcut which can be used in place of the full name, and several require a subcommand to specify a more precise action, such as item add and item drop.

This toggles collision for Cyrus, similar to the command tcl in other games. The main downside is that you can only walk horizontally; there is no way to increase or decrease vertical position without using the command at a different altitude. Also, jumping will freeze you in place until you disable the command.

This sequence of commands locks an object, usually an NPC or creature, at their current position. If you use the last command, rotation will be disabled as well. Locking the object's position can be useful for taking screenshots; it is not a very effective method of cheating. The best way to find an object to select is through the object closest command.

All of the map markers in the game are listed below. Use the load command and any map ID and marker combination to quickly travel to various locations. An asterisk (*) indicates that the location is used for a cutscene.