The UESPWiki – Your source for The Elder Scrolls since 1995
< Online: People(Redirected from Online:The Black Dragon)
Jump to: navigation, search 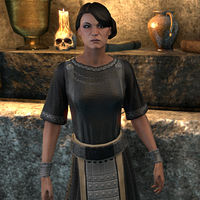 Lyra Viria is an Imperial and a former member of the Dark Brotherhood. While investigating the background of the Black Dragon, you will meet Lyra inside the Enclave of the Hourglass. Later on you will find out that Lyra herself is the Black Dragon. She was once a Silencer at the Blackwood Borderlands Sanctuary, and friends with Green-Venom-Tongue.

During the quest A Ghost from the Past, you and Green-Venom-Tongue discover that Lyra was tasked with carrying out the purification of the Sanctuary. Subsequently, she was ordered to kill Primate Jonas, the predecessor to Primate Artorius. After that, Artorius offered Lyra to become his champion, the Black Dragon - an offer Lyra accepted. In The Wrath of Sithis, Astara will ask you to travel to Knightsgrave and ensure that Lyra is killed. In Knightsgrave, the Wrath of Sithis will appear and consume Lyra's soul.

The Black Dragon: "Grand Sermonizer, have you discovered the location of the Sanctuary yet?"
Grand Sermonizer Fithia: "Unfortunately, this assassin expired before revealing anything useful."
The Black Dragon: "I'll capture another. Try not to kill this one before we learn the location of the Dark Brotherhood's lair."
Grand Sermonizer Fithia: "Lord Akatosh, hear our prayer! Let me just prepare the body … like so."
Tanek: "Who is that black-armored warrior? Some kind of mercenary?"
Tanek: "Now's our chance. Follow me!"

"It seems you have me at a disadvantage. But you don't have to be afraid of me. Put away your weapons and I'll help you in whatever way I can."
Tell me where I can find the Black Dragon.
"The Black Dragon? How brave of you to seek the most powerful warrior in our order. I can show you where her chambers are, if you like.
You know, the Black Dragon was a lot like you once, before she sought redemption."

<Remain silent.>
"Very much the same, I see ....
The Black Dragon was an assassin. A member of the Dark Brotherhood. Until she had enough of following the commands of others."

<Remain silent.>
"You're pretty good at that. Silence can be very intimidating. In the right hands, of course.
Come. I'll take you to the Black Dragon's chambers and you can meet her yourself."

Like me? What do you mean?
"As I understand it, she was an assassin. She killed on command and with impunity, leaving a graveyard full of corpses in her wake.
She's a member of the Dark Brotherhood. That is, she was. Until they pushed her too far."

How do you know all this?
"Members of the Order are encouraged to talk about their pasts.
But we should get to someplace more private. You don't want to get caught out in the open if more of the Order appears. I'll take you to the Black Dragon's chambers. We can talk there."

Lyra Viria: "Stay close. The Black Dragon's chambers are behind that door. Follow me."

As you read her journal, Mirabelle appears and whispers to you.

Mirabelle: "Psst! Assassin, up here! I'm waiting for the Black Dragon."
Lyra: "Setting a trap for the Dragon, is that the idea?"
Mirabelle: "Wait, who is that with you?"

<Lyra teleports up to Mirabelle and stabs her, shoving her off the ledge>

Lyra Viria: "I am death, you silly fool!"

Lyra Viria: "We'll meet again, assassin, and next time I'll be ready to deal with you!"

A Ghost from the Past[edit]

This Online-related article is a stub. You can help by expanding it.
Retrieved from "https://en.uesp.net/w/index.php?title=Online:Lyra_Viria&oldid=1982611"
Categories:
Hidden categories: