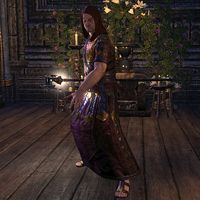 Primate Artorius Ponticus is an Imperial and the head of the Akatosh Chantry, as well as its military arm, the Order of the Hour. He resides in Kvatch's Cathedral of Akatosh.

A powerful and influential figure, Primate Artorius has spent almost his whole life in service to Akatosh, and is considered the religious authority of Cyrodiil. As Primate, Artorius oversees all aspects of Akatosh worship in the Cathedral. He is supported equally by Grand Chanter Surus and Grand Sermonizer Fithia.

Despite his religious station, Artorious is also secretly embroiled in political subterfuge and seeks to shape the political landscape of the Gold Coast. With his vast network of spies and informants hidden throughout the Gold Coast, many herald him as a stabilizing force in the region for most of his reign. Currently he is caught in a feud with the Dark Brotherhood, and enlisted the help of the Black Dragon to eradicate them. He is also involved in a three-way power struggle for control of the Gold Coast.

For historical information on Primate Artorius, see the lore article.

Artorius appears to have some form of control over time, as he will freeze everyone but himself and taunt the player with the "power of Akatosh" during the final battle. However this power is actually an AoE paralyze spell, as displayed in the Status Effects menu. 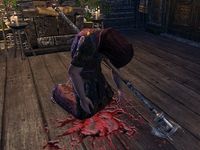 Artorius assassinated with his own staff

A Ghost from the Past[edit]

In hopes of finding out Lyra Viria's past, Green-Venom-Tongue asks you to meet him on the steps of the Cathedral of Akatosh in Kvatch. There, with the aid of some smoking resin, you witness the Primate convincing Lyra to betray the brotherhood and join him and the church:

Artorius: "Put away your weapon, child. We have much to discuss."
Artorius: "You feel lost, without purpose. But the opposite is true. Everything has led you to me."
Lyra Viria: "Oh really? I just see another witness that needs to be silenced."
Artorius: "I performed the Sacrament that brought you here. Not because Primate Jonas needed to die, but because the Dragon God wanted us to join forces."
Lyra Viria: "Join forces? I don't understand …."
Artorius: "You need to turn away from the Void and step into the light. Join me and together we'll walk the path to redemption."
Lyra Viria: "Redemption? I'm a murderer! There's no redemption for someone like me."
Artorius: "Nonsense, child. Akatosh performs more impressive miracles than that all the time. We just need to turn your talents to the holy work of the Dragon God."
Artorius: "Become my champion, a sword of Akatosh—my Black Dragon that burns away evil's darkness."
Lyra Viria: "I … yes. I see it now. I pledge my blade and my life to you and to Akatosh. Show me the way."

Enter the main sanctuary of the Cathedral of Akatosh and Primate Artorius will be waiting:

Fight Artorius and his minions until the primate is all but defeated. The world will go white and you'll find Artorius at the apse.

Astara Caerellius: "Assassin, strike true!"
Primate Artorius: "I will not beg for mercy from the likes of you."

Approach him from behind, take his staff from him, and impale the zealot with it.

Astara Caerellius: "To the Void with you, Artorius. May the Dread Father grant you the welcome you so richly deserve."