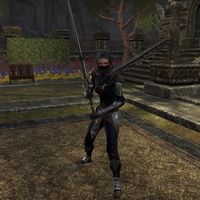 The Ascendant Champion is a Breton member of the Ascendant Order. She is in charge of the plot involving the abduction of Guild Scholar Valessea and the theft of some very special medallions.

She is first encountered deep in Sareloth Grotto where she is speaking with a fellow Ascendant about the medallions you are collecting:

After it is revealed that the medallions were sabotaged to kill whoever wore them, you race against time to locate the medallions that were handed out and dispel the magical trap on them. However, Valessea soon contacts you with bad news, she can no longer get in contact with Lady Arabelle who was delivering the amulet to High King Emeric directly on Sword's Rest Isle. When you arrive at the island with Jakarn, you find that the Ascendant Order have already attacked. And according to the Ascendant Champion's New Orders, the new plan is to murder King Emeric.

While trying to find Lady Arabelle in the Keep, you and Jakarn will witness a conversation between the Ascendant Champion and her superior—the Ascendant Magus:

Moving along the passage, you will witness another conversation between the Magus and the Champion. This time about Lady Arabelle:

Ascendant Order Mage: "We're almost through the wards, champion."
Lady Arabelle: "Take this, you coward! Look out!"
<As Lady Arabelle attacks, the Champion unleashes a burst of lightning.>
The Ascendant Champion: "I will take care of this!"

If you stay idle, the Ascendant Champion will shout threats at you:

During the fight she will use lightning magic and her greatsword.

From time to time, she will shield herself with lightning and summons cyclones to chase you, along with other Ascendant members fighting you instead.

Finally, she will summon a Giant Haj Mota

The Ascendant Champion: "You can't hold out forever!"

This Elder Scrolls Online-related article is a stub. You can help by expanding it.
Retrieved from "https://en.uesp.net/w/index.php?title=Online:The_Ascendant_Champion&oldid=2636646"
Categories:
Hidden categories: