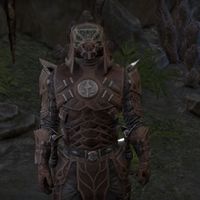 Seeks-the-Dark is an Argonian found inside the Eton Nir Grotto. He is here on a mission from the Thieves Guild to salvage some relics of the Cult of Meridia from their camps with his apprentice, Erilthel. He doesn't seem too fond of her.
He can be encountered again in Murkmire, where he has been captured by the Blackguards. He is being held in Blackrose Prison by Drakeeh the Unchained. Here you learn that Seeks-the-Dark used to be one of the Blackguards, and went by the name "Pimaxi-Taeed" before abandoning them and joining the Thieves Guild.

If you are a member of the Thieves Guild:

"The thieves guild send you? Hmph. Wouldn't go any deeper if I were you. Darkness crawls along the walls of Eton Nir. Only thing you'll find here is an ugly death.
That, and the corpse of my former apprentice. Most likely."

If you are not an Argonian:

"Wouldn't go any deeper if I were you, dryskin. Darkness crawls along the walls of Eton Nir. Only thing you'll find here is an ugly death.
That, and the corpse of my former apprentice. Most likely."
What happened to your apprentice?
"No idea. Erilthel asked to take the lead, and I obligingly took a nap. Didn't think it would be any trouble, even for a lackwit like her. Sneak past come cultists, grab the tokens, get out clean. Easy.
But now the place is swarming with Daedra."
So you think Erilthel is dead?
"Well, she's certainly missing, and I'm not risking my scaly hide going in to find her.
Hmm. You look scrappy enough. If you can grab those tokens and what's left oy my apprentice, I'll make it worth your while. What do you say?"
I can collect the tokens and look for Erilthel.

"I suppose I could answer some questions. Long as they're quick. I don't suspect Erilthel will make it out alive, but there's no use prolonging the news."

"What, are you the kind of sap who sheds a tear for every idiot lost on a job? Eh.
If you're so worried, what are you standing around here for? Go in and find her. Maybe she's still alive. Most likely not, but there's still a chance."

I thought you said she was your apprentice.

"Not by choice. The Guild shoved her in my lap and told me to start training. So far, all she's been good for is buzzing in my ear. Like some kind of mire-gnat.
Besides, I'm paying you to look for her, aren't I? Good enough."

What happened to the cult here?

"No idea. A cult of Meridia doesn't usually make a big splash, but here in Summerset? Well, they don't look kindly on Daedric cults. Even the nice ones. Not surprised someone wanted them gone.
Well, no matter to me. Long as I get those tokens."

Why does the Thieves Guild want those tokens of Meridia anyway?

"Not entirely sure, truth be told. All I know is they're worth something, to someone. Why that is, well, it's not my job to ask questions. Long as I get paid."

Once the tokens are collected and Erilthel is free:

"I see that Erilthel made it back in one piece. Thank the Hist. The Guild might have docked my pay if she wound up dead.
More importantly, did you find the tokens of Meridia in there?"
Here are the tokens.
"Good. I'll get these tokens back to the Thieves Guild. Honestly, this is one of the smoother operations I've been part of … sad as that is.
Maybe one day we'll do another job together. Not likely, but maybe."

He will then speak to Erilthel: (?)

"It was a close call with this mess. Lucky for me you showed up."
How's Erilthel holding up?
"Erilthel should be fine. I'll give her a bit to recover, then we'll make our way to a healer nearby. I know an elf who can keep quiet about these matters, for the right price."
Will you keep training her?
"Suppose so. What have I got to lose? Besides her again, I guess.
At least the lass is enthusiastic about the work. Always prattling on about becoming a great thief. Who knows, she might surprise me. Most likely not, but maybe."

After defeating Drakeeh the Unchained:

Erilthel: "Seeks! Are you all right?"
Seeks-the-Dark: "Ah, Erilthel. So nice of you to finally show yourself."

Speaking with him: If you haven't met him in Summerset before, he'll say:

"How fortunate for me that someone capable finally arrived."

"So we meet again. Fortunate for me, I suppose."

Then the conversation flows normally.

Why did the Blackguards target you?
"It's simple, really. I used to be a Blackguard. Then I decided not to be.
However, like most illegal operations, my retirement options involved either death or desertion. I obviously chose the latter. Drakeeh didn't take kindly to that decision."
Why were you a Blackguard?
"I was young and stupid. I wanted power, and didn't have an issue with using illegal means to obtain it. Still don't, obviously, given my position within the Thieves Guild.
I did, however, have an issue with coldblooded murder."
Why choose to come back to Murkmire, if there was such a risk?
"I didn't accept a job in Murkmire. Erilthel did, on my behalf. By the time I learned what happened, there was no good reason to turn it down.
It seems I'm just as dimwitted as my ever faithful apprentice."
You don't seem very grateful for the rescue.
"Oh, I'm sure Erilthel has blabbered on about your great deeds enough for both of us.
You should be proud, in fact. After all this, you'll probably get an entire chapter dedicated to you in that book she's writing."
A book she's writing?
""The Adventures of Lady Twilight" or some other such dribble. She talks about it nonstop. Has even read me a few passages.
Not that I asked her to, of course. But once Erilthel gets going, few things stop her."

If you pass by Blackrose Prison after rescuing Seeks-the-Dark, you can find him speaking with Erilthel.

Erilthel: "Now that we've put Blackrose behind us, it's time to finally complete our mission!"
Seeks-the-Dark: "Or we could lay low. Get some rest, recuperate from our near death experience ...."
Erilthel: "Rest? Recuperate? You're mentoring Lady Twilight herself, soon to be the greatest thief of our generation! There's no time for such things!"
Seeks-the-Dark: "Not even a day with you, and I'm already looking back at my days of capture with longing."

Speaking with him after this exchange, you'll find him disgruntled, but seemingly pleased to see you:

"How fortunate for me that someone capable finally arrived."