Borderwatch is an Imperial fortress immediately north of Leyawiin in Blackwood. The fort has been overrun by the Painted Eye, who have displaced the local garrison and have taken hostages.

This small settlement is occupied by a few villagers and some Ivory Brigade soldiers and consists of three inaccessible buildings. A chest may spawn to the left of the shed.

Some of the remaining soldiers under Commander Axius's command have set up a camp south of the fort occupied by the aforementioned officer and eight friendly Borderwatch Brigadines. Demands of the Painted Eye sits on a table outside the commander's tent, while a copy of Imperial Deception Song lies on the bed inside. A chest may spawn to the left of the tent.

The sewers provide a clandestine entrance to Borderwatch and leads to the cellars. They are occupied by Skeevers, Crocodiles, Death Hoppers, and Painted Eye soldiers. Erilthel will be found here stomping on some little spiders.

The cellars are a short linear section of corridor that heads up to the courtyard. There are rows of stacked cages here and during the related quest, Seeks-the-Dark will be rescued from one of them.

The courtyard of Borderwatch is a large open area full of Painted Eye soldiers. During the related quest, three groups of hostages have to be rescued from the southwest guard tower, the smithy, and the stables.

Beneath the fort lie Ayleid ruins that the Painted Eye were trying to locate. The exit from the ruins leads to a plateau above the village. 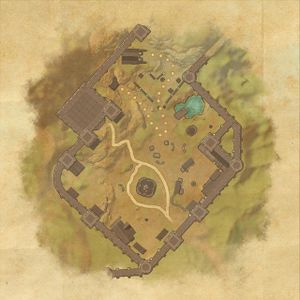 This Elder Scrolls Online-related article is a stub. You can help by expanding it.
Retrieved from "https://en.uesp.net/w/index.php?title=Online:Borderwatch&oldid=2502529"
Categories:
Hidden categories: