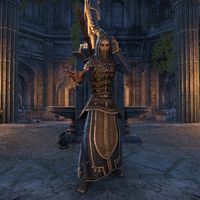 Cainar is an Altmer member of the Mages Guild who can be found within Eldbur Ruins.

Oriandra: "Cainar, listen to me!"
Cainar: "Oriandra? Why are you in my head?"
Oriandra: "There's no time for research. You need to get out of there."
Cainar: "And you need to ask permission before interrupting someone's thoughts!"
Cainar: "But thank you for sending me an assistant. We'll collect those samples in no time!"
Oriandra: "Just hurry before the mind trap snaps shut!"

Talking to Cainar for the first time:

"The magic that went into creating this mind trap is truly remarkable. An opportunity to learn something new comes along so rarely in the realm of arcane academia.
But where are my manners? What part of my memories brought you into existence?"

I'm not a memory. Oriandra sent me to rescue you.

"Rescue? Why in the world would I need to be rescued? I'm perfectly fine. In fact, I'm learning a great deal about mind magic and the manipulation of the mindscape.
Come to think of it, I could use a bit of help in that regard."

What kind of help do you require?

"I've come to the conclusion that this mental magic operates much like a disease that attacks the mind.
To prove my theory, I want you to collect samples of the invading spell particles. Do that, and I'll happily follow you back to the waking world."

All right, I'll gather a few of these spell particles.

"I'll continue to review these fascinating tomes while you collect samples of the mind magic particles. Between the two, ultimate understanding is within our grasp!"

Why aren't you more concerned about this mind trap?

"Nothing important gets accomplished without some risk. I have studied many different forms of arcana in my day. To study something so alien and new? That's worth braving a mind trap, as far as I'm concerned."

Are you a member of the Psijic Order?

"A Psijic? Me? By the stars, no! Oriandra and I met while she was conducting some bit of research or another. We've maintained a civil correspondence ever since, despite the way she looks down upon the Mages Guild.
Now get me some spell particles!"
How will I know a spell particle when I see it?

"Look for clouds of strange, glowing particles. I'd gather them myself, but I just can't put these books down. Not only are they riveting, I'm sure they hold the key to understanding the mind magic!"

Where did all these books come from?

"I … what? What does it matter? They're books! Full of information and knowledge waiting to be absorbed!
Enough of this! Get me those spell particles!"

Upon returning to Cainar with all three of the Spell Particles:

"These are perfect! Exactly what I needed! Now I can use these to … to … of course!
Stand back! With these particles, I can finally understand the meaning of these magnificent tomes!"

No Cainar. It's time to leave. You have to wake up!

"How dare you speak to me like that! I have a good mind to turn you into …. A good mind ….
My apologies. I almost allowed this trap to drown me in my own thoughts. You're right. Let's return to the waking world."

Oriandra, we're ready to get out of here.

The mind trap will then close and Cainar will make the following remark:

Cainar: "Thank you. I'll see myself to safety. You need to rescue the others!"

Talking to Cainar in the central section of the ruins, alongside Oriandra:

"My drunk friend and companion, Grog, is still out there. Oriandra assured me that you'd find him and return him to us safely."

Oriandra: "Grog is close. Strange, I don't sense K'Tora's dark power, though."
Cainar: "Hmm. I think he resisted the mind trap on his own, but he's still unconscious."
Oriandra: "Wake him up, please."

After finding Grog and tossing water over him:

Talking to Cainar in the central room of the ruins, alongside Grog and Oriandra:

"Miriya. She's a remarkable young woman. One of the best sword fighters I've ever seen. Please find her and free her from the mind trap."

Grog: "What's wrong with her?"
Miriya: "I think she's caught in a mind trap!"
Cainar: "I guess I'll need to cast another spell after all."
Cainar: "There! I've reestablished the mind link. Now go save Oriandra!"

Speaking to Cainar once he has re-established the mind link:

"I'm not sure how long I can maintain this link, so please hurry. I'd hate to lose Oriandra to K'Tora's mind trap!"

After completing the quest, Cainar and the other adventurers will make some final comments:

Miriya: "A thousand gratitudes for aiding us."
Grog: "What about the mind traps? There might be more still out there."
Cainar: "Sounds like a task we could dig our teeth into, my friends!"
Miriya: "Indeed! I prefer to be the hunter instead of the prey!"

In addition, if you talk to Cainar after this scene or while he sits around the campfire after the related quest, he will say the following.

"We'll find K'Tora, you can count on that! We've been adventuring long enough to know our capabilities, and hunting down a dark entity is certainly within our area of expertise.
At least, I'm pretty sure we can handle this. Almost positive."

Unless you've completed Buried Memories, and he'll say this instead:

"We'll track down the rest of K'Tora's Sea Sload, you can count on that! Hunting down these creatures is quite within our area of expertise.
Of that, I'm almost certain!"

Speaking to him the first time in Karnwasten:

"It's good to see you again! Thanks for rescuing me and my companions from that insidious mind trap.
By the way, if you're working with these smugglers now, you should know that I deprived a number of them of their existence."
Battlereeve Tanerline sent me to find you.
"Well then, it appears that your mission has thus far been a success.
Since you're here, I could use your help. My associate Grog has been captured. I need you to free him while I try to learn everything I can about the Sea Sload called K'Garza."
I thought you went off to hunt K'Tora.
"We did indeed! Turns out that K'Tora is just one of several Sea Sload terrorizing Summerset. We couldn't find the mind manipulator, but we located a necromancer in these caves.
Grog went to investigate, but he failed to account for the smugglers."

If you've already killed K'Tora, you can say:

K'Tora is dead. I killed him.
"You continue to impress me, newcomer. I hope you made the creature's last moments particularly painful.
But about Grog. He's chained up as a gift from the smugglers to appease K'Garza. Set him free while I look into the Sea Sload."
All right. I'll go rescue Grog.
"I appreciate the effort. While I may have dealt with a few of these scoundrels, I'm not capable of eliminating an entire army of smugglers. Besides, one of us has to investigate K'Garza and the other Sea Sloads. Summerset is depending on us."

How are you going to investigate K'Garza?
"As quietly and efficiently as I possibly can. I have no edsire to get into additional altercations with either the smugglers or the Sea Sload's undead servitors.
I'll meet you back here in this relatively safe loaction once we're both finished."
What do you mean that Grog is chained up as a gift to appease the Sea Sload?
"From what I've been able to observe, the smugglers have entered into some kind of arrangement with the Sea Sload. They occasionally leave prisoners for the creature to toy with.
Unfortunately, Grog is just the latest in a long line."
Why does Grog think the Sea Sload is responsible for the influx of undead?
"A hunch, I suppose. For an often-inebriated Orc, he actually excels at that sort of thing.
From what limited knowledge I have of the Sea Sloads, though, necromancy appears to be one of their favorite pastimes. I'll try to learn more once you depart."

Return to him after rescuing Grog. If you were able to persuade Grog to give you more information, he'll say:

"Thanks for retrieving Grog. He may be lazy, perpetually intoxicated, and a terrible cheat at Ancestor Draw, but he is one of my steadfast companions.
Was he able to shed any additional light on the Sea Sload menace?"
Yes, Grog uncovered information about the Sea Sload called K'Garza.
"Interesting. That corresponds with what I was able to learn.
Anything else? My drunken companion usually discovers the most tantalizing secrets."
K'Garza is a necromancer while another Sea Sload to the south is working on a way to sink Summerset.
"Sink the island? Magic of that sort sounds as remarkable as it is terrible.
Miriya and the High Elf marines headed south, following rumors of some sort of natural phenomenon. I wonder if they're related? You need to go help her."

If you were not successful in getting everything out of Grog, he'll say instead:

"Probably in search of a barrel of ale or a cask of wine. Grog hates to face a threat when he's not intoxicated.
Too bad he didn't tell you what he learned during his reconnaissance of the Sea Sload, though."
Grog did send me to find this journal.
"Let me see that! Hmm. The Sea Sloads plan to sink the island? That's ... well, that's rather impressive. In a terrible sort of way.
Miriya took the marines and went south, but they have no idea what they're walking into. You need to go help her."

From here, the conversation is the same:

Aren't you going to help me?
"Time is of the essence. While you go south to aid Miriya, I'll return to Alinor and bring what we've learned so far to the Battlereeve. It splits our forces, but I don't see any other way.
Good luck and may the stars light your path."

Meeting up with him in Alinor, before speaking to Battlereeve Tanerline:

"Talk to the Battlereeve. She's been waiting for you to return.
Besides, I can hear you perfectly fine from over here."