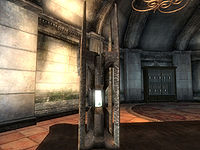 One Ayleid Statue, with the other nine visible in the display case in the background

To begin this quest, find an Ayleid Statue. There are ten in total, one in each of the Ayleid ruins listed in the section below. Selling this statue to a merchant will net you a maximum of 250 septims. The statue disappears from the merchant's inventory as soon as you exit the barter screen. After selling the statue, expect to be approached by a messenger after a short period of time. The messenger will take you to Umbacano's Manor in the Talos Plaza District, where you find out that he has purchased the statue from the merchant. Alternatively, take the first statue directly to Umbacano. Enter his manor and show the statue to his butler, Jollring, who will then introduce you to Umbacano. Umbacano will then buy the statue for 500 gold, which is double its base value.

You learn from Umbacano that the statue is one of the Ten Ancestors, statues that once resided in the Temple of the Ancestors, now known as White Gold Tower. Before the fall of the Temple to the rebellious Cyrodiil, the statues were removed for safekeeping and held within ten different Ayleid cities. He wishes to acquire the full set of ten, but he lacks a resourceful treasure hunter.

To continue this quest, search Ayleid ruins until another statue is found; see the section below for locations. When the second statue is sold to Umbacano, he will say that his research has discovered five Ayleid settlements where he believes statues were taken—Fanacas, Mackamentain, Moranda, Ninendava, and Wenyandawik. Map markers for all of these will appear on the map, but you will have to travel there manually, unless you have been there before.

Once the third statue is sold to him, he will give you another assignment as well: the quest Nothing You Can Possess. He will pay 5,500 gold when the tenth statue is delivered (500 for the statue, plus a 5000 bonus for completing the set).

WARNING: It is recommended to find and sell all ten statues to Umbacano before Stage 60 of Secrets of the Ayleids, which follows Nothing You Can Possess. After this point, The Collector cannot be completed successfully.

North of the "Ch" in "Cheydinhal" on your map.

There is a small lake located just to the left of the word "Basin" in "The Nibenay Basin". On the northwestern shore of this lake is this ruin.

Just south of "The" in "The Orange Road."

Just east of Sancre Tor, or northwest from Moranda and about half-way to Hermaeus Mora's shrine.

Directly across the water from where you exited the Imperial Prison sewers at the start of the game.

There should be a smaller river southwest of the words "Panther River" on your map, follow that body of water up to the actual Panther River and where they meet is Welke.

If you look at your map, Wendelbek is directly north of the "nt" in "Panther River."

Find "The Black Road" just south of Chorrol. Directly south from the "ac" in "Black" is Wendir. Directly northwest of Hackdirt.

South of the "R" in the "Road" portion of "The Green Road" which is northwest of Bravil.