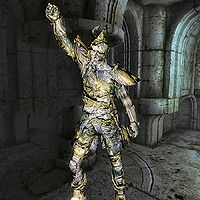 The Ayleids, also known as the Heartland High Elves or Wild Elves, were the first race to establish an empire in Tamriel, and had ruled modern-day Cyrodiil for countless years dating back to before recorded history. Ayleidoon, their language, is similar to Aldmeris, the ancient language of the Aldmer. The Ayleids were the original founders of the Imperial City, which they called the "Temple of the Ancestors". However, their empire collapsed in the early First Era.

Much like how the ruins of the lost Dwemer dot Hammerfell, Skyrim, and Morrowind, the Ayleids have left ruins scattered around Cyrodiil and other regions which were once under the dominion of their Empire. These underground cities can prove deadly for adventurers, hiding such dangers as traps, monsters, undead, and criminals. Their cities were amazing feats of architecture ranging from small settlements to gigantic, labyrinth-like metropolises shaped out of whitish rock. They also seem to have had a firm grasp of the magical arts, as many of their ruins contain stones filled with magicka essences harvested from the sky. They also developed what came to be called the school of Alteration, as they were skilled in magics such as shapeshifting and levitation. As for their appearance, like all elves, they were most likely thin and lean with pointed ears and angular facial features. Their complexion was lighter than that of the Dunmer, but they were darker than Altmer. They preserved many of the ancient runes and Dawn Era magics of the Ehlnofey that other elves had forgotten. The prophecies of the moth-eyed foretold that Ayleidic hubris would "bear bitter fruit", a warning that many, apparently, failed to heed. It would be their undoing.

There are 55 Ayleid ruins in Cyrodiil. In addition, the 35 Ayleid Wells found in various locations (many near Ayleid Ruins) were also built by the Ayleids.

There are several items found during Oblivion that are associated with the Ayleids, many of which are part of the series of three quests involving Umbacano. These items are:

Ayleids do not exist in the game as their own race, however, there are NPCs that are considered Ayleids (despite being something else technically):