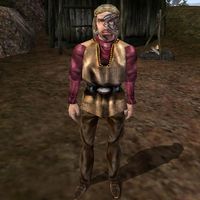 Sjorvar Horse-Mouth is a Nord master-at-arms who lives by himself in a house in the West Gash region southwest of Ald'ruhn and northwest of Caldera. He is one of the Blades trainers that Caius Cosades will direct you to see, and he offers medium training in Axe, Blunt Weapon, and Long Blade to fellow Blades. If you ask him about it, he will recommend that you see Galbedir at the Balmora Mages Guild for enchanting services.

He is wearing a common shirt with a matching belt, pants, and shoes. He is wielding a steel battle axe. Aside from his natural resistance to shock, immunity to frost, ability to shield himself, and a natural frost damage spell, he knows no spells.