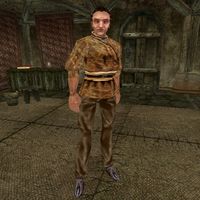 Hasphat Antabolis is an Imperial drillmaster and an Apprentice for the Fighters Guild. Hasphat Antabolis can be found in the lower level of the Fighters Guild in Balmora. He is also the author of Dwemer History and Culture which appears in Oblivion (and again in Skyrim) and Life and Times of the Nerevarine which has not yet appeared in any games. He offers minor training in Athletics, Block, and Hand-to-hand.