The UESPWiki – Your source for The Elder Scrolls since 1995
< Morrowind: People / Merchants / Spell Merchants / Trainers
Jump to: navigation, search 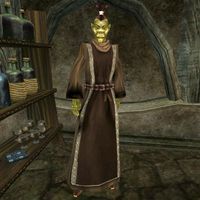 Sharn gra-Muzgob is an Orc healer and Spell Merchant and Associate in the Mages Guild. Sharn gra-Muzgob can be found in the lower level of the Guild of Mages in Balmora, and offers minor training in Alteration, Mysticism, and Restoration.

She is wearing a common robe with matching shoes. Like all Orcs, she has a natural resistance to magicka, and can boost her health, fatigue and attack for short periods, at the cost of agility; Aside from that, she knows the following spells: Balyna's Antidote, Balyna's Soothing Balm, Cure Common Disease [Other], Dispel, Strong Resist Shock, Strong Resist Poison, Strong Resist Magicka, Strong Resist Frost, Strong Resist Fire, Spell Absorption, Calm Creature, Fifth Barrier, and Strong Feather.