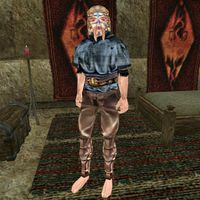 Sjoring Hard-Heart is a Nord drillmaster and the current leader of the Fighters Guild in Morrowind at their headquarters in Vivec's Foreign Quarter. Many members are concerned about the new direction the guild is taking under his command, and suspect him of having ties to the Camonna Tong. He is also Radd Hard-Heart's brother.[1]

Sjoring wears a common shirt with matching pants and carries a steel cuirass with matching greaves, pauldrons, gauntlets, and boots. He wields a steel warhammer of smiting. Aside from his natural resistance to shock, immunity to frost, ability to shield himself, and a natural frost damage spell, he knows no spells.