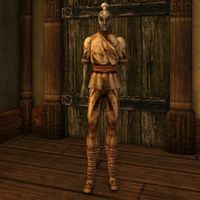 The default appearance of the player character

The Nerevarine (also referred to as the Incarnate) is the figure at the center of the Nerevarine Cult, which believes that Lord Indoril Nerevar will be reincarnated and return to Morrowind to defeat Dagoth Ur and restore the glory of Resdayn. Nerevar is said to have cursed the Ring of the Ancestors, One-Clan-Under-Moon-and-Star so that any other who tries to wear the ring would die instantly. Favored by Azura, Nerevar reborn is immune to disease and protected by the prophecy.

The timing of Nerevar's return is directly linked to the prophecy of The Stranger, where the Blight, Corprus and the Sleepers signal the Nerevarine's fulfilment of the prophecies.

Through the Main Quest, the player character becomes the Nerevarine, by progressing through the Seven Trials, becoming immune to all diseases, acquiring Moon-and-Star and being named Hortator and Nerevarine by the Great Houses and Ashlander Tribes of Vvardenfell, respectively, eventually fulfilling the Nerevarine Prophecies completely by working with the Dissident Priests.

This Morrowind-related article is a stub. You can help by expanding it.
Retrieved from "https://en.uesp.net/w/index.php?title=Morrowind:Nerevarine&oldid=2596566"
Categories:
Hidden categories: