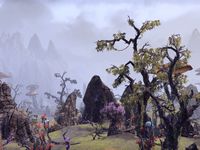 Varanis is a rural region situated in the southwest of the region of Stonefalls, which is located in the province of Morrowind. Varanis is a largely uninhabited region, mainly used as a source of agriculture in the greater area of Stonefalls, as seen with the biggest settlement, Kragenmoor and the plot of land known as the Sathram Plantation. On the western edge of Varanis lies the Iliath Temple, the largest place of worship for the Tribunal in all of Varanis. Both tribes of Ashlanders in Stonefalls inhabit the Varanis region. The Kagesh Tribe centers around the Iliath Temple. The Ulath Tribe's ancient burial grounds, Cave of Memories, is located in the central part.[1] The greatest landmark in Varanis is the Tormented Spire, which spews great clouds of ash and smoke, leading to many Dark Elves in Varanis to scramble for shelter.[2]

During the Imperial Simulacrum, there was a settlement called Verarchen Hall located in the area which was ruled by Lord Zirath. It had a rivalry with the settlements of Markgran Forest and Reich Parkeep.[3] It was neighbored by several settlements, including Karththor Dale in the southeast, and Silgrad Tower in the northwest.[4]