The UESPWiki – Your source for The Elder Scrolls since 1995
< Lore: Factions: Q
Jump to: navigation, search 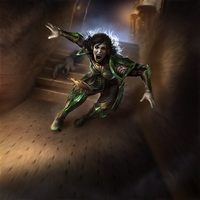 The Quarra Clan is one of the three major vampire bloodlines found in Vvardenfell. It was founded by the Imperial Volrina Quarra sometime in the mid-Second Era, after she went on a mission to destroy the Berne Clan for killing her brother.[1] The Warriors of the Quarra fear nothing, and with good reason. Of all the Vvardenfell clans, they are the strongest physically. They are not subtle, and would rather slaughter an entire village than choose a few on which to feed. By the end of the Third Era, Clan Quarra was still led by Volrina Quarra and from the Dwemer ruin of Druscashti. They also had a presence in the many ancestral tombs around the island.

Some sources claim that Volrina Quarra was slain in 3E 427, as a vial of her blood was wanted by both Mistress Dratha of House Telvanni[2] and the Berne Clan;[3] and that the Aundae Clan then killed many of the remaining members of the clan.[4][5]