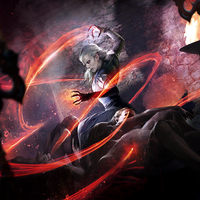 The Aundae Clan is one of the three major vampire bloodlines found in Vvardenfell. The clan consists only of Altmer vampires. The Mages of Aundae are blessed with dark powers of the mind; their path through the darkness relies on their mastery of magic. They were led by Dhaunayne Aundae from their headquarters in Ashmelech. The clan also had a presence in the many ancestral tombs around the island. There are hints that the Clan has some affiliation with House Dres, though House Dres denies it vehemently and no proof either way exists.[1]

In 3E 427, many members of the clan were killed by Berne Clan and Quarra Clan.[2][3] Garan Marethi, member of the Volkihar Clan for many centuries circa 4E 201, claims to have links to the Aundae clan from Morrowind, though no one has ever confirmed them.[4]