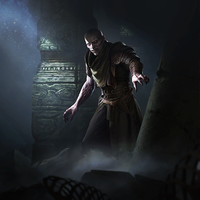 The Berne Clan is one of the three major vampire bloodlines found in Vvardenfell. Those of the bloodline are very agile and sneaky, gifted with unnatural skill in unarmed combat.[1] The Shadows of the Berne are the true masters of the night. Sliding through the darkness, invisible in the shadows, they hunt their prey in secrecy and silence. In 2E 582, the Berne Clan were present in Galom Daeus and Dushariran. They were led in 3E 427 by Raxle Berne from the Dwemer ruin of Galom Daeus. They also had a presence in many of the ancestral tombs around the island.

In 2E 582, Jastia Berne and Dexion Berne were attempting to gain access to a Dwemer component by using Dwemer control rods taken from constructs, this ultimately ended up in their deaths as the Dwarven spider they attacked blew up and killed them both. In 3E 427, Raxle Berne was slain by a vampire hunter from the Tribunal Temple,[2] and the Quarra Clan and Aundae Clan killed many of the remaining clan members.[3][4]