Volrina Quarra was an Imperial vampire and the matriarch of the Quarra Clan of Vvardenfell. Volrina was born in the Second Era. Around 2E 582, she worked for the wizard Barilzar, retrieving objects vital for the mage's research from dangerous locations. However, she quit after her brother was killed by vampires of the Berne Clan during the job in the Dwemer ruin of Galom Daeus. Volrina managed to escape the ruin and vowed to take revenge against the Berne as soon as she could come up with a "foolproof plan". Later, Volrina met the Vestige, who was trying to locate the Dwemer devices which Barilzar needed to build a tonal inverter. Volrina pointed them to Galom Daeus, and the Vestige retrieved one of the necessary components from there.[1][2] 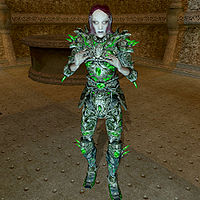 Eventually, Volrina became a vampire herself. It is unknown if she was turned against her will or if it was a part of her plan to take revenge against the Berne. Regardless, Volrina started her own bloodline, the Quarra Clan, which subsequently waged war against the other two clans of Vvardenfell, the Berne and the Aundae. In 3E 427, the clan operated out of the Dwarven ruin of Druscashti in the northern Ashlands, but some of the members dwelled in various ancestral tombs around the island.[3]

In the same year, a vial of Quarra blood, which Volrina kept locked in her room in Druscashti, became an object of desire of both Raxle Berne, the patriarch of the Berne clan, and Mistress Dratha of Tel Mora. According to some sources, Volrina was slain during an attempt to retrieve the potion.[3]