The UESPWiki – Your source for The Elder Scrolls since 1995
< Lore: Places: G(Redirected from Lore:Gilverdale)
Jump to: navigation, search 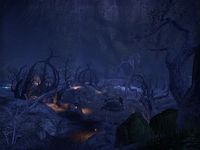 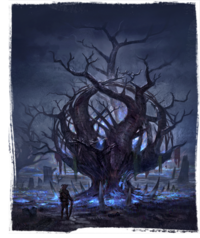 Gil-Var-Delle (also known as Gilverdale) was a town in southern Valenwood, located west from Elden Root and north of Southpoint in Grahtwood region.

The town was probably founded during the late Merethic Era or soon after King Eplear, a Bosmer warlord, united the tribes of Valenwood under his rule, an event traditionally regarded as the beginning of Year Zero of the First Era. The settlement grow around the Elden Tree, an enormous and ancient graht-oak, only second in size to the one in Elden Root, and seeded directly by the walking one in Falinesti. By this time, Gilverdale was a small inland Bosmer settlement with little political or economical significance.[1][UOL 1]

In 1E 2714, the small town, along with the rest of Valenwood was conquered by the Second Empire, after centuries of unrelenting warfare along the border with Cyrodiil and a plague from Thras.[2] Although the province became occupied by the Imperial Legion, they continued to experience resistance from some natives for several years.[3]

During the Second Empire rule of Valenwood, each of the treethanes of Falinesti, Silvenar, Haven, Cormount, Elden Root, and Woodhearth were given a minor kingdom, rising from local to regional powers. This way, Valenwood was divided into six independent kingdoms ruled by local Bosmer nobility, but under the Second Empire banner and protection. During this time, Gilverdale came under the rule of Elden Root treethanes, who ruled the Kingdom of Grahtwood.[2]

According to most sources, the entire settlement was destroyed by the Daedric Prince Molag Bal on 19 Sun's Dawn, 1E 2920, summoned by the, then mad King of Senchal, Dro'Zel. He was angered with a Bosmer bard from Gilverdale, who performed a "depressing" piece in the ballroom of the royal palace of Senchal. That very night, he communed with Molag Bal himself to wipe the town in revenge for that bad performance.[4] This act of destruction had at least one important result. The living god Almalexia had experienced a dream that had revealed to her that Morrowind would lose its current war unless Sotha Sil returned to the province[5]. She was traveling to Artaeum to convince Sotha Sil to return when she came across the remains of the town[6]. Upon reaching Artaeum and telling her story, Sotha Sil entered Oblivion to arrange a pact with the Daedric Princes[7], and persuaded eight of them only to use "intermediaries such as witches or sorcerers" to attack mortals rather than manifesting directly. The second result is less certain. Since Sotha Sil eventually arrived only shortly after Morrowind had lost the final battle of the war at the siege of the fortress of Black Gate. It is possible that the delay imposed by his excursion into Oblivion was directly responsible for the Imperial victory. Only with the Morag Tong intervention, whose members murdered all the members of the Reman Dynasty, Morrowind was saved from losing its independence.[8]

In 2E 578, the Worm Cult reoccupied the ruined site, making preparations for the oncoming Soulburst. That same year, Flaccus Terentius, author of The Improved Emperor's Guide to Tamriel, suffered from nightmares which distorted his sense of reality, and sought help from a Bosmer Spinner in Elden Root while he waited for an Imperial envoy from Haven but to no avail.[9] However, the Spinner resulted to be Mannimarco himself in disguise, who led him to the ruins of Gilverdale, filling his mind with visions of Coldharbour and a post-apocalyptic Tamriel. He began to physically fade in between the two realms during these dreams, once encountering the wizard Malkur Valos briefly in Coldharbour. The Soul Shriven guided him throughout the realm, showing him the cruelties of their Dremora overlords and the imprisonment of Lyris Titanborn. In his waking hours, the cuts he received at Markarth began to reopen and bubble, and he continued to work on his notebooks to stave off the growing madness. He took accounts of the various Daedra, and of visions he received of the destruction of Gilverdale in the late First Era. His dreams prophesied the coming Alliance War, the sacking of Bravil, Dark Anchors falling all across Cyrodiil, and Daedric Titans being unleashed on Nirn for the first time in the skies above the Imperial City. Terentius eventually died in a hut in Gilverdale, and his soul claimed by Molag Bal, leaving nothing behind but his notes and paintings.[10] His work was discovered on the 19th of Last Seed 2E 581 by Mactator Caprenius, a courier of the Fourth Legion who was sent to Elden Root to find him. It was forwarded to Abnur Tharn and the Imperial Geographic Society for publication.[11] In 2E 582, the Worm Cult reappeared at Gilverdale to launch a large-scale invasion on Valenwood from the already corrupted site. However, Almalexia sent High Ordinator Danys to defeat the cultists. The Vestige encountered the Ordinator and together released Worm Cult prisoners, ready for sacrifice, and destroyed the Fang of Chaos and the Dark Anchor who fell from the skies.[12] The Dominion knew of the High Ordinator presence in Grahtwood, but allowed this Pact intervention for the good of all Valenwood.[13]

The settlement was never rebuilt and remained a wild site and a testimony of Molag Bal's power.[14]

The destruction of Gilverdale became a symbol to the peoples of Tamriel of the Daedra malign influence and power to bring senseless destruction to the land. It was also a warning about the fragile protection which the Aedra Akatosh gave Nirn against Oblivion forces when he sealed the famously holy Covenant with Saint Alessia.[15][16]

The Tribunal living gods gained credit in Morrowind and within the Potentate as protectors against the Daedra. Sotha Sil moot in Oblivion was even immortalized in a poem named "The Coldharbour Compact". Therefore, the destruction of Gilverdale and the subsequent Tribunal intervention became part of the common imaginary of Tamriel peoples.[17]

However, not all academics think the same about the destruction of Gilverdale. According to the Second Era author Fastor, since the primary historical source is a fiction piece which attempted to dramatize what occurred there, none of those stories can be confirmed, except that a catastrophic event struck the town, wiping in some way the residents. He theorizes that a large fire could have been the culprit, not a direct Daedric intervention, from which Nirn was protected by Akatosh and not by any later Tribunal dealing. So, Fastor considered Gilverdale a maligned place, but not because of any tangible danger, save cowardice and superstition.[18] On the other side, Culalanwe, Sapiarch of Oblivion Studies during the mid-Second Era, detected residual Daedric energies in the ruins of the town much stronger than any other site he had visited previously. He thought that it was remarkable that this much corruption remained even so long after Molag Bal's destruction.[19] Worm Cult interest in the city during the Soulburst could not be considered a proof for any of the two antagonistic theories. They would have wanted to use Gilverdale for its cultural significance, popularized by "2920, The Last Year of the First Era" books, or for its residual Daedric energies, both detected by Culalanwe, Almalexia and the Vestige.[12]