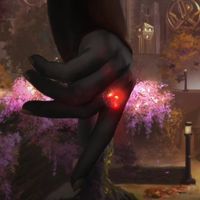 Barilzar's Mazed Band was an artifact of immense power created by the Clockwork Mage Barilzar in the middle of the Second Era. It was created with the primary purpose of being a means of teleportation, and is capable of teleporting both the wearer and people who touch the wearer at the time of teleportation. The ring's powers far exceeded Barilzar's intentions, as it was able to open rifts in time and space, and could even open the gates of Oblivion, releasing nightmarish creatures upon the land. The ring was cursed and stripped of its power, so that only a god could use it without being destroyed. This curse is thought to have resulted in the death of Barilzar, although the mage lived on as an undead lich and was sealed within an abandoned crypt in Old Mournhold, along with the ring.[1]

In the late Third Era, the cave-in blocking his crypt was excavated at the orders of Almalexia, linking it to the temple sewers beneath the city of Mournhold. In 3E 427 Almalexia sent the Nerevarine to retrieve the ring from the crypt. Barilzar defended the Band with his life, determined that the artifact should never be used again, but he was slain and the ring was brought to Almalexia. Although the ring was cold, the embers of its power still burned within, and she used her magic to reawaken its power.[1]

Although she had claimed that possession of the ring would help her to better care for her people, Almalexia had obtained the ring for a malicious purpose. Driven to madness by the loss of her divinity, she planned to murder her fellow Tribunes, Sotha Sil and Vivec, as well as the Nerevarine. Her first target was Sotha Sil, who had withdrawn from the world and now dwelled within his Clockwork City. She used the Mazed Band to journey to the Clockwork City and kill Sotha Sil. She then used the ring to teleport fabricants from the Clockwork City to Mournhold. These semi-organic robots were creations of Sotha Sil, and they caused havoc in the streets of Mournhold. Almalexia then claimed that the reclusive Sotha Sil had been driven mad and was launching an attack on the city. Using this ruse, she tricked the Nerevarine into going to the Clockwork City to kill him. There, Almalexia confronted the Nerevarine, but she was defeated in combat. The Nerevarine took the Band and used it to teleport back to Mournhold. The ring had the ability to teleport its wearer between Mournhold, the Clockwork City and Vivec City, or temporarily summon a fabricant; no elements of its curse or evil powers remained.[1]

In 4E 201, Mecinar, a former Clockwork Apostle who was banished from the Clockwork City for his perverse research into creating the perfect lifeform,[2] employed treasure hunters from across Tamriel to retrieve Barilzar's Mazed Band to use in order to return to the City to see his vision through. In an effort to claim the riches that may lie in the city for themselves,[3] the Forgotten Hero along with their adventuring party, tracked the Band to Forelhost in the Rift. The heroes however didn't realize that treasure hunters in the employ of Mecinar followed them, and easily stole the band from them after they were weakened. The Forgotten Hero's friend, an Argonian named Swims-at-Night, would not give up his prize, and reached out and grabbed the hunters while they were using the ring and was teleported into the city along with them.[4] The Forgotten Hero determined to rescue their friend, sought the help of Divayth Fyr's daughter, Alfe Fyr, who teleported them into the Clockwork City. The Hero saved their friend, and defeated Mecinar. It is unknown what happened to the Band subsequently. [5]