The White-Gold Tower is a group dungeon found in the center of the Imperial City.

Traditionally the seat of the Empire, the Tower has been overrun with Daedra and is being pulled into Coldharbour by Molag Bal. Empress Regent Clivia Tharn is attempting to retake the structure. White-Gold Tower has both a Normal and a Veteran mode.

The dungeon can be entered from the Irrigation Tunnels, the Lambent Passage, and the Harena Hypogeum.

The Daedra have invaded the White-Gold Tower as part of their full-scale attack on the Imperial City. Terran Arminus, an Imperial Moth Priest, seeks your aid in retrieving an Elder Scroll she has hidden in the Tower. It's imperative you find it before the Daedra. Will you be successful, or succumb to the forces of Molag Bal?

Race to the top of the White-Gold Tower in pursuit of a stolen Elder Scroll—but is the top of the tower even in Tamriel anymore? What secrets does Regent Clivia Tharn have up her Imperial sleeves?

The entrance. Empress Regent Clivia Tharn, Sister Terran Arminus, the Empress' guards, and several Imperial archers, healers, and soldiers can be found here. The Daedric Embers Trophy Vault is located through a tunnel on the west side of the room. 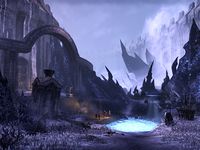 A chest and a heavy sack can spawn by the Ruby Throne, behind the boss.

The third pull is just out in the hallway and to the left. It consists of three Skeletal Foot Soldiers, a Dremora Morikyn, a Xivkyn Bulwark,a Xivkyn Lacerator, and a Skeletal Assassin. A passive snake slithers among their boots, and there's a fiendroth ahead and to the right. The door at the end of this hallway brings you to the Lower Elder Scrolls Library.

When you pass through the door, you'll end up in a hallway cluttered with rubble, almost to a claustrophobic extent. The first group of enemies in this hallway consists of four Banekin, two Skeletal Assassins, a Skeletal Foot Soldier, and a Dremora Morikyn. A Crematorial Guard blocks the way through the door at the end of the hall.

The door brings you to the next section of the library, where you'll fight the Imperial Dragonguard. Sister Terran reveals the Elder Scroll, and Clivia Tharn grabs it, causing the ceiling to explode. She then commands her Dragonguard to kill everyone present as she flees through the side door.

The third Speaking Stone is in the hallway. The Battlemage Quarters are filled with Spider Daedra, their egg sacs affixed to the ceiling and walls.

A Crumpled Note can be found next to a corpse in the Imperial Regent's Quarters, near the pinnacle. Skeletal corpses are skewered by blades of all sizes on and around the Empress Regent's bed.

There are ten Achievements associated with this dungeon: