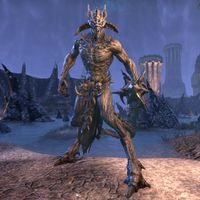 Molag Bal is the Daedric Prince of Domination and the Enslavement of Mortals. He is the main antagonist, and is attempting to pull Nirn into his realm of Oblivion, Coldharbour, in an event known as the Planemeld. Molag Bal has stolen the soul of the player, forbidding them to die. To reclaim your soul, you must save Tamriel from the Prince's clutches. 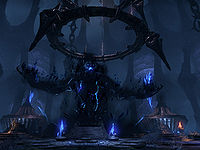 Molag Bal rains on your parade

When you reach the Dark Anchor Mooring, Molag Bal appears and summons the Child of Bones.

Molag Bal: "The mortal thinks it can defy me. Futile. Soon your world will be in my chains."

Once Mannimarco is killed, his spirit will rise from his body.

Mannimarco: "Do you really think that death can stop the most powerful necromancer Tamriel has ever known?"
Mannimarco: "This is merely a transition! My first step towards true immortality!"
Mannimarco: "Now witness my true power! Watch as I rise up from the grave and ascend to godhood!"

Mannimarco will begin to cast a spell, only to be interrupted.

Molag Bal: "Worm! You think you can betray the Lord of Brutality and Domination without consequence?"

Mannimarco is blown flat on his back by a powerful force, leaving a crater in the ground. A dark anchor portal opens above him. Molag Bal reaches out of the portal and lifts Mannimarco into Coldharbour with a simple gesture.

Molag Bal: "You will pay for your arrogance! You will writhe in agony for the rest of eternity! Your tortured screams will echo throughout Oblivion to serve as a warning to others!"

Once Doshia is vanquished, Molag Bal addresses her failure with an air of disappointment.

Molag Bal: "You have failed me, Doshia."

At the end of the vision in Abagarlas, he takes the Mortuum Vivicus back to Coldharbour.

Molag Bal: "Worm! You accomplish nothing. I remove the Vivicus to Coldharbour. This doom will come again to Tamriel."

He interrupts the reforging of the Prismatic Weapon in the Earth Forge:

Molag Bal: "Fools! Do you truly think you could hide that trinket from the God of Schemes?"

Molag Bal: "The people of Abagarlas serve me even in death! My devoted, kill them! Kill them and bring me the crystal."

When the first few skeletons are defeated, he summons Queen Palolel, who is now a lich.

Molag Bal: "That blasphemy must not be allowed to be reforged! Bring that crystal to Coldharbour."

When all of his undead servants are defeated, he withdraws.

Molag Bal: "Remember this day, mewling wretches. My followers serve me even in death."

In the Halls of Submission, Aelif's treachery is revealed. She was a servant of Molag Bal the entire time. Molag Bal turns her into a Daedric Titan during the battle:

Molag Bal: "A boon for my servant. Receive my power and destroy them!"

When Aelif is defeated, Molag Bal expresses his disdain over her failure to protect the Mortuum Vivicus:

Molag Bal: "Aelif, you miserable failure! You are not worthy of my gifts!"

After Battlemage Papus is killed in the Bangkorai Garrison crypts, Molag Bal will ominously say:

Molag Bal: "Your Covenant cannot escape my wrath. You will see soon enough …."

Leaving the crypts will reveal that the Battlemage successfully summoned a dark anchor inside the garrison walls.

Molag Bal: "Bangkorai is mine, mortal. You cannot possibly protect it."
Molag Bal: "Your king and queen will soon be slaves in Coldharbour!"

The Weight of Three Crowns[edit] 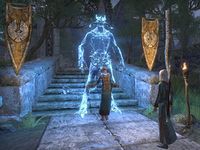 Projection of Molag Bal in Stirk

Molag Bal reveals himself on the island of Stirk, mocking the mortals and their quarrels.

Molag Bal: "These are the great leaders of Tamriel? Pathetic. But how convenient to have them gathered together in one place, so I can crush them like insects."
<Countess Hakruba rushes at the projection of the Daedric Prince.>
Countess Hakruba: "Molag Bal!"
Vanus Galerion: "Stay back, Countess!"
Molag Bal: "The insects fight back! How amusing, and yet so very sad"
<The projection of Molag Bal dissipates as he summons three powerful Daedric minions to assassinate the alliance leaders.>
Molag Bal: "All of Nirn shall be mine!" 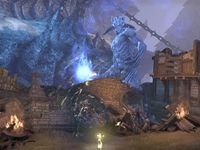 After Meridia smites a second anchor in the Planar Vortex, Molag Bal appears from behind a wall: 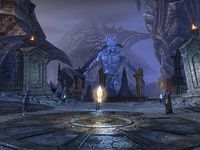 Bal with his council

Later on, Molag Bal will be addressing his council near the Light of Meridia:

Clorsatari: "The light approaches. It brightens the shadows. It attempts to break the darkness."
Kehothar: "But the darkness is strong. Our father, our god—he is the darkness. He shall repel the light."
Verkynvayl: "Our father approaches. He will consume the light. He will tear it apart. He will destroy it. He will destroy you!"
Clorsatari: "Our father has spoken. He wishes us to challenge you and you alone."
King Laloriaran Dynar: "What... what's going on? No!"
Molag Bal: "You believe that light can destroy my Planemeld? Your Prince thinks I would allow this? She is more foolish than I thought."
Clorsatari: "I live to serve. It will be my pleasure to destroy this one, my lord."
Molag Bal: "Oh, how sad. You were drafted into a war you could never win. My council shall destroy you. I shall enjoy watching a hero die!"

Once the council is defeated, Meridia will appear with the rest of your allies:

Molag Bal: "Most curious. This light powers you somehow. Meridia... where are you hiding?"
Meridia: "Merely fetching those who would stand against you."
Molag Bal: "I tire of this game. Now you shall die!"
Meridia: "Quickly, get behind my shield!"
Molag Bal: "Did you think it would be that easy? My minions will tear you apart."

Meridia will then cast a shield around the light will a teleportation spell is cast. When it is complete, she and Bal will yell:

Meridia: "The light is ready! Quickly, release it!"
Molag Bal: "No! You cannot do this! I cannot fail!"

Upon entering Molag Bal's sanctum after being imbued by the power of the Dragonborn, he will threaten you as you approach his throne, while throwing Daedra at you.

Molag Bal: "Your continued meddling has reached an end, Hero of Tamriel!"
Molag Bal: "What is this foolishness? Has your tiny mortal mind snapped? Do you really think you can defeat me?"
Molag Bal: "The dark machinations of Oblivion are far more complex than anything your mortal senses can comprehend."
Molag Bal: "Your anguish will be legendary, even in Oblivion!"

"I am God of Oblivion! You are less than nothing!"
Molag Bal: "Still you fight on? Do you care nothing for your own existence?"

Once you reach him, he will grab you and start crushing you in his fist.

Molag Bal: "I am God of Oblivion! You are less than nothing!"

When you unleash the power of the amulet, his giant form will crumble and he will meet you on the battlefield. He will still shout threats at you as you fight.

Molag Bal: "Your pathetic Aedric trinket can't defeat me! I am Molag Bal, Lord of Domination!"
Molag Bal: "What is this? Infant! Do you think your toy can slay a god?"
Molag Bal: "Your mind is naked to me! I can taste your fear! You are fertile ground for the seeds of eternal torment!"
Molag Bal: "Tamriel is ripe, and I have all of eternity to reap its harvest of flesh! Death comes for you and all children of the Mundus on black wings!"
Molag Bal: "I am the face of pain! The souls of the damned are my weapons! You will know eons of suffering!"

Once you have beaten him down, he will fall to his knees and with the last of the blessing's power, you will form a sword of light to strike him with.

Afterwards you will you will witness a flashing bright light and be transported to The Colored Rooms. A familiar voice will call out to you.

Molag Bal in the Colored Rooms

Meridia: "Come forward, Vestige. You are safe, for now. Something precious to you has been riven from Stone-Fire's being. I have brought it here for you to reclaim."

When you've reclaimed your soul, the projection of Molag Bal will "congratulate" you.

Molag Bal: "I congratulate you, little insect. Your sting is formidable."
Molag Bal: "You have bested me and released a thousand times a thousand souls back into the Mundus."
Molag Bal: "For the moment, your world is spared, but my grand scheme has only begun to unfold. Excellent. Your power shall prove useful in the coming conflicts."
Molag Bal: "The dark machinations of Oblivion are far more complex than anything your mortal senses can comprehend."
Molag Bal: "You've made a great and terrible enemy this day. Your world would have been better off if the Planemeld had succeeded. Had you bowed before me and accepted eternal servitude, I would have protected you. There are worse masters than I. Far worse."
Meridia: "You are but a phantom here in my domain, Stone-Fire. The mortal prophecies of the Scrolls have been fulfilled. Leave this place and return to your pit!"
Molag Bal: "You have a powerful ally. Did you know that she would bring you here? What future role has she to play in this grand, cosmic farce, I wonder?"
Molag Bal: "Bah! Your meddling has already cost me too much, accursed creature of light and flame. This farce no longer amuses me."

He will then leave the plane.

At Dolmens throughout Tamriel, Molag Bal will address the players attacking them at certain stages:

Molag Bal has dialogue that has a chance to occur if the player has completed the Main Quest.

Occasionally, the final boss wave will instead be replaced with Molag Bal summoning one of his fearsome generals, with his dialogue varying by each one.

The following dialogue has not yet been sorted into the above categories, and is listed here.