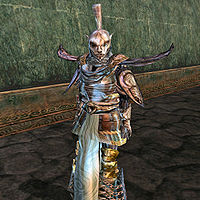 The Hands of Almalexia are the personal guards of the goddess Almalexia. The Hands are pledged to honor, protect, and serve Almalexia in all ways. Also referred to as simply "Her Hands", their bodies and souls are fortified by divine magic, and their armor and weapons bear fearsome divine enchantments. They are said to be greater than the High Ordinators who, according to Fedris Hler, are among the greatest fighters in all Morrowind. Some even say the Hands are the most terrible mortal warriors in the world.

Despite their enchantments, the Hands are actually 10 levels lower than the respawning High Ordinators patrolling the streets. (Salas Valor is an exception as he's level 40 rather than 50.) Their enchanted armor, weapons and powerful abilities more than make up for this difference in level, however. Each Hand is a master of block, heavy armor and long blade - skills which are only further boosted by their divine blessings. Their strength and endurance have also been increased to unnaturally high levels (170 and 125 respectively.)

In the past they used to spend much of their time punishing criminals and protecting the people. Now they spend all their time protecting Almalexia. The Hands are currently led by Almalexia's Chief Steward, Fedris Hler, a former Assassin.

Speaking to any of the Hands will have them express their undying loyalty towards Almalexia, after which they will send you on your way: "We await the Goddess' command. Her word is our law. There is no time to speak with the likes of you." If you are wearing the sacred cuirass and/or helmet, conversing with a Hand will have them stay their hand, unlike with other High Ordinators: "You wear the sacred garb of the Ordinator, but you are not of the Order. I stay my hand solely at the Lady's discretion. Speak with me no more."