After completing The Way of the Voice, Arngeir will assign you one last task to prove you are Dragonborn: retrieve the Horn of Jurgen Windcaller, so named after the founder of the Greybeards. The Horn is located in the ruin of Ustengrav, which Arngeir marks on your map.

The simplest way to reach Ustengrav is to take a carriage to the town of Morthal, then travel the marshes on foot. The ruins are due northeast of the town. If you wish to walk, the fastest route from the Throat of the World is to pass through the fields around Whiterun and follow the route northwest directly through Labyrinthian. However, this route will require you to deal with the multiple frost trolls that roam the exterior of Labyrinthian. When you arrive at Ustengrav, you'll encounter some bandits who have been enthralled by a necromancer. You may also encounter a mudcrab. Once the danger has passed, travel into the ruin.

The first level of the ruin is fairly straightforward, with a few bandits, warlocks, and draugr to deal with, or let them kill each other. The groups here are often small enough to be handled alone. They are also hostile to each other, so sneaking and following the mages deeper into the ruin will allow for the groups to thin each other. Deal with any remaining draugr and descend into the second zone of the ruin. Note: More detailed information about Ustengrav can be found on this page. 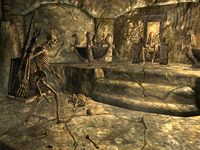 Skeletons dwell in the depths.

Upon entering Ustengrav Depths, you will see a sparsely forested chasm with a waterfall and a bridge far below. To descend, navigate the winding path through the rest of the ruin. You will encounter several draugr and a fire trap along the way. The outdoor area itself hosts several skeleton archers, both on the ground by the bridge and in the somewhat higher level with the wooden barricade. These can be easily defeated with ranged attacks. In the room with the tall pillars, a skeleton seated on a throne will come to life at your approach. If you jump to the rocks on the left at the top of the ramp leading down into the room, then jump and use Whirlwind Sprint between the circular platforms on the pillars, you will reach a secret room with a soul gem and a chest.

Near the bottom of the waterfall is a word wall with a word for the Become Ethereal shout. It can be seen from the bridge, and is reachable by a small path carved from the side of the cave wall. Behind the waterfall is a hidden area containing a draugr and small amounts of loot. The Horn, however, lies on the other side of the bridge. After gaining the word, return up the path and cross the bridge. On the way back up, on the right side, there is a ramp leading up to a ledge with a chest; a corundum and a silver vein can be found nearby.

Across the bridge, a lone skeleton can be found. It can easily be dispatched. The main feature, of the area, are the three outcrops of rock carved with runes. There is also a tunnel with all of its gates down. Each of the rocks glows red at your approach and lifts one of the gates barring passage through the tunnel. However, the gates will often shut soon upon opening. The easiest solution is to use the Whirlwind Sprint shout, using it to sprint through the stones opens the gates long enough to walk through them all. Once you are clear, the gates will remain fully open, allowing any followers to catch up. With only one word of the shout learned, getting all three gates to stay open long enough is trickier. The gate can be opened by starting at the rock closest to the bridge, sprint by each of them until you get close to the tunnel entrance, and from there use Whirlwind Sprint to clear all the gates at once. It is also possible to stand in front of the first rock, use Whirlwind Sprint, and then run through the rest of the tunnel. It is also possible to stand between the first two rocks to open the first two gates, use Whirlwind Sprint and then run; the third gate should stay open by then. If you become trapped between gates inside the tunnel, you will find pull chains that will allow you to return to the rocks and try again.

The floors of the next few chambers are covered with fire traps. There are two frostbite spiders on the cobwebbed arch. The pair of spiders can be lured onto the traps. It's possible to avoid the traps by staying close to the walls. The traps have a slightly delayed reaction to your passing over them, so if you're on your own, you can get away by using the Whirlwind Sprint shout, or the Become Ethereal shout, or just sprinting forward and you won't be badly burned. The sides also contain some areas of trap free space (The lighter tiles are safe to step on, while the darker ones will trigger flame traps). The Sneak perk, Light Foot, will also work for bypassing the trap. Another solution is to shoot the tiles with a spell such as Firebolt or Ice Spike. Flames/Sparks, etc. do not work. The impact of a bolt or spike is enough to set off the trap if it is not a safe tile. Any follower brought here may be in danger as long as you are in the trapped area. They will continuously take damage from the traps.

After walking through here, you will find a large room. This room contains a more powerful giant spider hiding in the ceiling, as well as smaller spiders. The giant spider will attempt to ambush you when you get close. Using resist poison and resist frost potions may help you survive this encounter.

After dispatching the spiders, cut or burn through the two sets of cobwebs covering the tunnel. If you are collecting alchemical ingredients, you will find three spider eggs in the egg sacs in the spiders' nest. Otherwise, go right ahead and enter the final chamber. 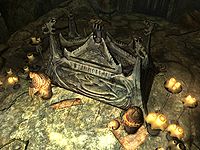 As you make your way through the final room, four Nordic dragon carvings rise out of pools of water. On the pedestal where the Horn should be resting, you will instead find a mysterious note addressed to "the Dragonborn". It states that the Horn has been removed, and requests that you meet the note's anonymous author by renting an attic room at the Sleeping Giant Inn in Riverwood.

Having failed the task, do as the note says and go to Riverwood. When you speak to Delphine about renting the appropriate room, she will tell you that there is no attic room, but that you can take the one on the left. Delphine follows you, reveals that she was the one who took the Horn, and gives the Horn to you. She asks to speak privately, and she will lead you to the room across from yours. Delphine opens the wardrobe door, revealing a secret room beneath the inn. In this room, she tells you that her organization has been looking for someone like you, and that she took the Horn in order to get your attention. This exchange with her begins the quest A Blade in the Dark. After speaking with her, you are free to return the Horn to High Hrothgar and complete the quest.

Return to High Hrothgar with the Horn and present it to Arngeir, completing the task he originally gave you. Arngeir will go to the main hall, where the other Greybeards are assembled, and Wulfgar will teach you the final word of the Unrelenting Force shout. There the Greybeards will speak to you at once in the dragon language, formally recognizing you as Dragonborn. (You are not harmed by this exchange.)

This completes the quest, and from now on, any item in High Hrothgar can be taken.

Although not directly tied to completing this quest, most players will unlock the following achievement during this quest, when the final word of Unrelenting Force is learned:

Notes
* Any text displayed in angle brackets (e.g., <Alias=LocationHold>) is dynamically set by the Radiant Quest system, and will be filled in with the appropriate word(s) when seen in game.
Retrieved from "https://en.uesp.net/w/index.php?title=Skyrim:The_Horn_of_Jurgen_Windcaller&oldid=2382324"
Categories:
Hidden categories: