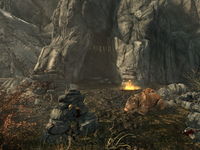 Gromm's Pass is a small cave located in the Rift, south of Forelhost. Until a recent collapse, it served as an underground pass through the Jerall Mountains to Cyrodiil.

It consists of one zone: Gromm's Pass.

The cave entrance is marked by a lit brazier among the bones and blood. A bear spawns right where the fast travel marker is, so be prepared for an ambush if you aren't approaching on foot. An iron ore vein can be found to the right of the entrance. 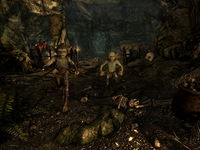 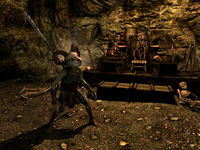 Gogh next to the throne

This Skyrim-related article is a stub. You can help by expanding it.
Retrieved from "https://en.uesp.net/w/index.php?title=Skyrim:Gromm%27s_Pass&oldid=2131908"
Categories:
Hidden categories: