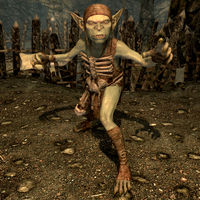 Goblins are small creatures related to Rieklings that can be found inhabiting Gromm's Pass and can be randomly encountered rarely throughout Skyrim. They have been left stranded in Skyrim due to a collapsed cavern that led to Cyrodiil. This tribe of Goblins is now led by the Blue God, an Orc painted blue that has been mistaken for the Daedric Prince Malacath. They vary in appearance; some use no armor, while others use leather or iron armor. They can sometimes be found carrying samples of Steel-Blue Entoloma.

It is possible to recruit a Goblin named Gogh as a follower. Unlike other Goblins who lack any weapons, Gogh wields a Daedric artifact known as the Spear of Bitter Mercy.

This Skyrim-related article is a stub. You can help by expanding it.
Retrieved from "https://en.uesp.net/w/index.php?title=Skyrim:Goblin&oldid=2369333"
Categories:
Hidden categories: