The UESPWiki – Your source for The Elder Scrolls since 1995
< Skyrim: Goblins: Quests
Jump to: navigation, search

Upon installing the Goblins Creation, this quest will be automatically added to your journal. You have heard rumors of strange creatures coming up through the Jerall Mountains from Cyrodiil and decide to investigate by heading to The Bee and Barb in Riften. Once there, you will be directed to a room upstairs, where you will find a Letter to Clexius. This piece of personal correspondence describes a tribe of Cyrodilic Goblins who have invaded a cave known as Gromm's Pass. By all accounts, they seem to be led by the "Blue God", an aspect of Malacath worshipped by Goblins. You'll have to head there to investigate. 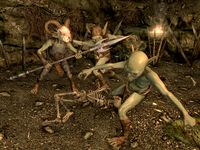 A Goblin heretic fighting back

Gromm's Pass is a new cave added by this Creation. The entrance can be found in the valley directly south of Forelhost. It is notable for being filled with hostile Goblins as well as a unique type of mushroom called Steel-Blue Entoloma‎‎. This plant is added by the Creation and cannot be found elsewhere, although it can be grown in Fertile Soil so it would be advisable to harvest a few samples while you're there. While exploring the cave, you will soon come across the body of Avanessa Calladius, the mage whose letter you found. On her corpse you will find a copy of The Posting of the Hunt, a book which describes the legendary Spear of Bitter Mercy. The relevance of this will soon become apparent, once you step foot inside the cave's central chamber where a Goblin wielding this legendary Spear is currently battling for his life inside an enclosed fighting pit.

You likely won't have time to watch the fight, as the chamber also serves as a throne room for the Blue God. Kill him and his Goblin minions in order to loot the powerful Goblin Totem Staff from his corpse. You will also have to read his journal, which reveals that this supposed manifestation of the Blue God was actually just a hapless tribal Orc who covered himself in Steel-Blue Entoloma‎‎ paste to trick the invading Goblins into following him. Unfortunately, the underground passage to Cyrodiil has since collapsed.

Once you've had a chance to read the journal, you will be directed to free the surviving Goblin in the fighting pit, where he was thrown after figuring out the Orc's trickery. His name is Gogh, and he will be more than happy to join you as a follower for saving him from the pit. He acts similarly to the Riekling Warrior follower from Dragonborn and can be spoken to at length despite his rather lacking vocabulary. You have the option to change his outfit visually, but you cannot take the Spear of Bitter Mercy. It is left unclear as to why exactly a Goblin is in possession of a powerful Daedric artifact, but he will use it to great effect as a follower, using it to perform attacks and summon storm atronachs.

Gogh cannot be commanded to stay at any of your houses. If he leaves your service, he will return to the throne area in Gromm's Pass.