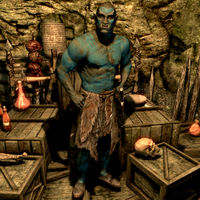 The Blue God is an Orc masquerading as a deity of the same name, specifically the Goblin interpretation of Malacath. He is hostile and you will need to kill him during the related quest.

He carries the Blue God's Journal and wields a Goblin Totem Staff in battle.

His journal reveals that he was originally from the Orc stronghold Largashbur, where he was considered a black sheep. He unintentionally became the leader of a goblin tribe after visiting Gromm's Pass with full blue body paint, which made the goblins mistake him for the Blue God. His secret was almost discovered when the goblin Gogh caught him applying the blue dye to keep up the act. The imposter sentenced Gogh to death in the goblin's fighting pit. With enough goblin troops gathered, he planned to assault Largashbur for his ill treatment from its inhabitants.

This Skyrim-related article is a stub. You can help by expanding it.
Retrieved from "https://en.uesp.net/w/index.php?title=Skyrim:Blue_God&oldid=2424462"
Categories:
Hidden categories: