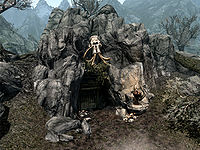 Bruca's Leap Redoubt is a small cave inhabited by Forsworn. 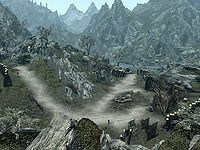 The campsite at the entrance 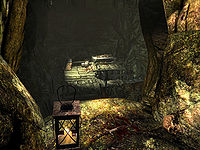 Peering into the main chamber

The cave has only one zone which is very small. It is simply a bending passage leading down to a chamber. The chamber has some wooden scaffolding. The Forsworn Briarheart and its guard will likely be alerted to your presence right away. However, by sneaking it is possible for you to snipe at them from the window-like opening straight down from the entrance. On the ledge you will also find an iron dagger. At the bottom of the tunnel, you'll find a coin purse and a Dwarven arrow.

Lying on a table is the corpse of a Forsworn who was in the process of being transformed into a Briarheart: his heart and an iron dagger are placed nearby. Various pelts are lying around while on a bookshelf you'll find a copy of the Enchanting skill book A Tragedy in Black along with a few ingredients. At the bottom is an apothecary's satchel, and a random potion is placed in a bucket nearby. The boss chest is behind the bookshelf, but make sure you avoid the bear trap in front of it.