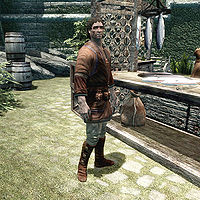 Addvar selling fish at his stand in Solitude

Addvar is a Nord fishmonger selling his wares from the market in Solitude. He is the husband of Greta and father of Svari. His wife will take over running their marketplace stall if he dies.

While his wife lost all hope following the execution of her brother Roggvir, Addvar seems focused on providing his family a proper income during tough times. He gets out of bed at 6am and heads to the market, where he sells his produce for a whopping fourteen hours in a row. At 8pm he returns to his house and spends the evening enjoying the cooking of his wife and the company of his daughter. At midnight, he heads upstairs and goes to bed. While he will promote his services around the clock, you can only trade with him from his stall.

Like the rest of his family, Addvar is quite poor and his attire reflects that. He wears a set of cheap merchant's clothes along with a pair of boots. Due to a bug he doesn't carry his house key, but a key to one of the prison cells in the Karthspire. He wields an iron dagger and carries a selection of lower-class items and gold.

At all times, Addvar will promote his fish business around the clock, saying:

"Plenty of fresh fish for ya."
"I've got some salmon to sell."
"You shouldn't leave Solitude without trying our fish. Best in Skyrim."
"Fresh fish! Fresh fish!"
"Fresh Fish! Straight from the Fjords!"
"The finest fish, here! Caught daily!"

Where do you catch the fish?
"Down at the docks. There are a few good spots, if you can avoid the East Empire Company workers and those Red Wave thugs."

You and your daughter were at the execution.
"Svari, yes. It's been hard on her. The girl misses her uncle. I've tried to explain that Roggvir did something bad and that we all have to be accountable for our actions but... a child feels what she will."

Upon exiting conversation he can say:

"These are troubled times. Be on your guard out there."
"May the gods speed your journeys... and steady your sword arm." 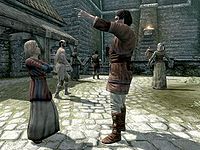 When you first arrive in Solitude, you will witness Roggvir being executed and Addvar mercifully asking his daughter to go home. Vivienne Onis will be present as well, and the following scene will play out:

Svari: "They can't hurt uncle Roggvir. Tell them he didn't do it."
Addvar: "Svari, you need to go home. Go home and stay there until your mother comes."
Vivienne: "You should tell her that her uncle is scum that betrayed his High King. Best she know now, Addvar."
Addvar: "You're all heart, Vivienne."

Also, if you visit Addvar's house in the evening, these conversations can be heard:

Addvar: "Svari, Jala said you stole an apple from her cart yesterday. Is this true?"
Svari: "Just a little one! I was hungry!"
Greta: "I'll talk with Jala, dear. I'm sure she'll accept a potato as repayment."
Addvar: "I suppose. But Svari, we don't steal. We're better than that. Understand?"
Svari: "Yes, papa."

Addvar: "A little late in the day for your rounds Sorex."
Sorex: "I seem to have more chores for the Winking Skeever each day. I still have a delivery to do too."

Silana: "Fresh fish sounds like just the thing today, Addvar."
Addvar: "I've been pushing the Salmon but I'll tell you the Slaughterfish is a bit better today."
Silana: "Thank you, Addvar, I am picky about what I eat these days."

Aia: "Salmon sounds good today."
Addvar: "Speaking of sounding good, I've heard a couple of your classmates on the street recently."
Aia: "As long as they're playing instruments they're passable. You don't want to hear them sing."

Rorlund: "I wish we could have absolved your brother-in-law of his sins before his execution."
Addvar: "I don't think he would have wanted your absolution, Rorlund. He worshiped Talos. I appreciate the thought though."

Illdi: "I'm sorry about Roggvir. It's a shame, I liked him."
Addvar: "Greta is taking it hardest. She won't go to the Temple of Divines anymore."

Ataf: "I went out ice fishing a few days ago."
Addvar: "Brave man, with the Blackbloods out there. Did you catch anything?"
Ataf: "Naw, mostly just froze."
Addvar: "Well, keep at it. The fish have to get to know you before they're willing to bite."