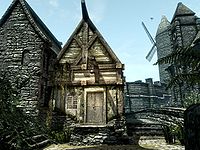 Addvar's House is a small house in the residential district of Solitude, located next to Evette San's House.

It is the home of town fishmonger Addvar, his wife Greta, and their daughter Svari. It consists of only one area, Addvar's House. 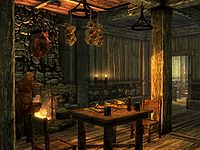 This house is a comfortably lit wooden building. To the left of the rug by the entrance is a basket holding a woodcutter's axe, along with a small crate containing a gourd, an orange dartwing, a rock warbler egg, and a fly amanita, as well as a nearby bucket holding a whole pheasant. Hanging above the half-wall to the left are three rings, which hold a total of six rabbits and one salmon.

In the central area, there is a table with two chairs, above which are three hanging garlic braids. On the table are two tankards, a loaf of bread, garlic, an Eidar cheese wedge, Nord mead, and two identical meals on wooden plates, which consist of four grilled leeks and seared slaughterfish. In front of the fireplace is a cooking pot and a cast iron pot holding a cabbage. Mounted above the fireplace is a goat head.

To the left is a small area set aside for food preparation. Beneath an elk head mounted on the wall is a table with four tankards, a barrel of mead, a horn candle, two potatoes, beef stew, a pheasant breast, a raw rabbit leg, two and a half loaves of bread, two baked potatoes, four grilled leeks, a salmon steak, seared slaughterfish, and a number of cheese wheels and wedges.

To the right are two rooms. The one next to the basket of tundra cotton contains a bed belonging to Svari. In this room are two respawning food barrels, a basket, a bucket, a non-respawning wardrobe, and a non-respawning end table with Alto wine and a horn candle on it. The next room is the pantry, with seven goat cheese wheels, seven Eidar cheese wheels, six potatoes, three cabbages, and two carrots. On top of one shelving unit is a potion of regeneration, and on the other is a copy of the book Uncommon Taste. There are also three respawning food barrels stacked behind the shelving units, and a few clutter items. Next to this room, under the stairs, is a non-respawning chest containing a small amount of gold, with a high chance for an animal part or other miscellaneous item to appear, and a very small chance of a torch appearing.

The upper level has a number of small items, along with a few pieces of furniture to sit on. On a long crate there rests a non-respawning large sack and a small coin purse. The nearby chest (non-respawning) only has loot if you have Imperial Luck, Prowler's Profit, or Golden Touch. On the adjacent cupboard (non-respawning) are a gourd, a gold piece, fine clothes, boots, a troll skull, three pieces of garlic, some tundra cotton, a clothes iron, and a human skull. On a thin table near this cupboard are an iron helmet, a roll of paper, a tankard, and a horn candle. In a corner is a double bed belonging to Addvar. Near this bed are a non-respawning end table and a table with a chair next to it. On the table are two tankards, some bread, a bottle of wine, and a melted candle.