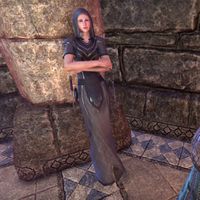 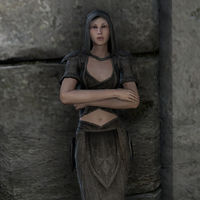 Vimy Lacroix is a Breton who is a follower of Neramo. She becomes a member of The Spearhead's crew after the events of Bthzark. When asked about her skills, she boasts that if The Spearhead encounters slavers they'll be fine. Vimy can also be encountered in Nchuleftingth and Betnikh, assisting Neramo with his expedition.

Once the Spearhead is ready to leave Stros M'Kai, Vimy can be found onboard standing next to Mekag gro-Bug‎.

"This should be an interesting voyage. Quite a crew Kaleen has thrown together!"
Who are you?
"Vimy Lacroix. I'm a collector of sorts, one who travels to places others dare not go.
I hoped to join Neramo's expedition to Bthzark. When I heard he completed it and was sailing on, I just had to come along."
What do you do, exactly?
"You're inquisitive. What I do, I do well. You'll be glad to have me on this voyage if we encounter slavers.
And I make a wicked sliced ale."

She can be seen at Moriseli on Betnikh, where she'll be unimpressed with the ruin.

"Nothing but dusty tomes and rusty weapons. I expected tagging along with Neramo to be more lucrative."

She can be seen inspecting the cabinets in the cabin of the Spearhead:

"Oh. Don't mind me. Just making sure these cabinets are secure."

"I think I'm just about done with Neramo. All we've done since I joined is talk about expeditions, not actually join any.
Still, a berth is a berth. I'll stay with Captain Marck until I find something better."

She can be found at the Sentinel Mages Guild along with Neramo.

"At last. We're finally going to explore a real set of ruins, just Neramo and Clanker and me, and Clanker doesn't take a split.
I'm so looking forward to this." 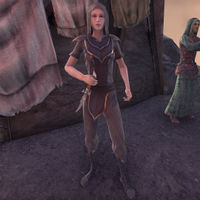 When you first approach Neramo's camp, you can overhear Vimy reassuring Daren Hlen:

Vimy Lacroix: "Easy does it. You're safe now."

If you have met her and Neramo before starting this quest, she says:

"Well, if it isn't Neramo's second favorite assistant. I'm assuming he told you to come find me?
As you can see, the situation's not ideal. We could use some help."
How can I help?
"Hm. Neramo wants you to snatch his stupid control rod back from that oaf, Lenarmen, right? Well, we've got bigger problems.
I rescued this lot from Lenarmen's mercenaries, but they still have our dig leader, Kasouda, and two others."
I'll track them down. Anything else?
"Well, if you're feeling spry, you could try and track down some information about that Bthark Prism Neramo keeps yammering about. I was ready to cut and run, but with your help we might still be able to turn a profit on this disaster."
All right. I'll help you search.
"We're really doing this, eh? I hope Kasouda and the others appreciate the effort.
Lotaeel will get this lot back to the surface. Neramo and I will be right behind you."
Tell me about the workers who are still missing.

"Like I said before, Neramo hired Kasouda to lead the dig. She's tough as they come - organized too. She made my job a lot easier, I can tell you that. Most of the time I have to whip the party into shape every now and again. Not with Kasouda."
And the other two?
"Right, Thollidor and Tyrnea.
Thollidor is a sharp-eyed Wood Elf. We brought him on to look for traps. Tyrnea's a sellsword, like Lotaeel. Unfortunately, they're both mouthy as alits. I hope they haven't made Lenarmen mad enough to kill them."

What happened exactly? Did Lenarmen ambush you?

"Yeah. Nchuleftingth's chock full of dark corners and hidden perches. We made it about halfway through the ruin, then Lenarmen's goons came down on us like a sackful of hammers.
I got Neramo out, but he lost his rod during the scuffle."
So you went back and rescued these others after Neramo escaped?
"I did.
Pulling Daren and Brerayne out wasn't too hard, but Lotaeel was anxious to dole out some justice along the way. Ended up stabbing and hacking out way out. We really stirred up a hornets' nest. Now Lenarmen's thugs are on high alert."

Do you believe the Heart of Lorkhan is here?

"Hey, I just work here. If Neramo says the Heart isn't here, that's good enough for me. My only concern is rescuing our diggers and keeping them safe.
Of course, finding some loot sure wouldn't hurt."

After you have finished speaking with Vimy at their camp in the ruins, Neramo will walk in himself, much to the surprise of his bodyguard:

Neramo: "Ah, Vimy, I see you're still alive. Excellent."
Vimy Lacroix: "What are you doing in here? Didn't I just get you out?"
Neramo: "I will not have Lenarmen stealing my prize. With our friend here, I have nothing to fear."
Vimy Lacroix: "All this optimism. Wow. No offence, friend."
Neramo: "I know secret paths through the ruins. We will shadow our intrepid assistant, and help as opportunities present themselves."

She will help you by switching off an electrical defense-system that prevents you from retrieving Neramo's Dwemer control rod:

After you have collected the device, you can find her waiting near Neramo a bit deeper in the ruins:

"So many ramps... Long, steep ramps. Just give me a moment to catch my breath."

If you speak with her again after finishing her conversation with Neramo, you'll find her ready to go again:

"We've got a horde of mercenaries searching for us, and scads of Dwarven death-machines prowling around, but hey, at least we've got a broken control rod now, right?
Well... enough talk. Off we go, eh?"

After you head into the chamber where Lenarmen is, she and Neramo will do so as well. They will help you to defeat this foe:

Neramo: "Come, Vimy! To battle!"
Vimy Lacroix: "Stay behind me, you idiot!"

Once the battle is over, she will follow Neramo into the next room. In there, she and Neramo will become your followers for a while. You can speak with her before heading over to the prism:

"Well, that was one experience I never want to repeat. Let's keep moving."

When you recover the prism, she will at once express her disappointment with the fruit of her labour:

Vimy Lacroix: "That's... remarkably unimpressive."
Neramo: "Looks can be deceiving, my dear Vimy. This is our prize!"
Vimy Lacroix: "Hooray"
Neramo: "I wouldn't mind taking a look around this vault before we leave. Quite a trove we've discovered."

If you speak with her at this point, she'll be slightly more optimistic:

"Let's have a look around. Maybe we'll finally find something valuable."

She and Neramo will comment on the objects around the vault as you interact with them. Their reaction to the astrolabe is as follows:

Neramo: "Yet another Dwemer astrolabe. Unremarkable, I'm afraid."
Vimy Lacroix: "And worthless. Story of our lives."

And to the centurion head:

Vimy Lacroix: "And there's a centurion head here... why?"
Neramo: "Without the interior machinery, I'm afraid we're left to wonder."
Vimy Lacroix: "I do love wondering."

And finally, to an empty chest, which stands near a book by everyone's favorite scholar, Artisan Lenarman, entitled ""The Heart of Lorkhan, My Final Prize":

Neramo: "Well, here's a gem. This coffer held something of special significance."
Vimy Lacroix: "Let me guess - you have no idea what it was, and it's gone now."
Neramo: "Right on both counts."

Once you have interacted with every possible object, you can once again speak with the somewhat crestfallen Breton:

She and Neramo will stop following you when you leave the ruins. You can talk to her at the camp where the rest of the expedition members have gathered as well:

"You know, this is the first time I've enjoyed the smell of Vvardenfell air. You know what it smells like? It smells like being alive.
Thanks for all the help down there."

She remains at Neramo's camp, where you can speak with her again after completing the quest:

"Take care of yourself. I'm sure we'll meet again... in some machine-infested ruin."
You managed to get everyone out?
"We did, thanks to your efforts.
Got to admit, I'm shocked we all made it out of there alive. Daren probably earned himself a limb, but on the whole I'd call this a measured success."
So what's next?
"I follow Neramo to the next dig, I guess. He seems pretty excited about this Bthark-whatever-it-is. For now at least. Once he gets bored with it, we'll be off to our next adventure.
So long as he keeps paying me, that works just fine."
Stay safe, Vimy.