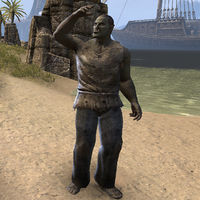 Mekag gro-Bug is an Orc who is found in Saintsport. He is a member of Crafty Lerisa's crew, and has been captured by the Sea Drakes. He has a crush on Lambur and has made a bet with her: if you visit them on The Spearhead after the events of On to Glenumbra, she owes him dinner.

After talking to Lerisa, you'll find Mekag in the upper floor of a building on the west side of town.

"Don't know who you are, but you better run if you don't want the Sea Drakes to gut you."

If he is rescued last, he will say:

"If you're going to kill me, get it over with."
Lerisa sent me. Take this disguise and sneak out.
"Ha. Another of Helane's tricks? Let me go, then chase me down and beat me within an inch of my life?
I'll chance it and make a run for Port Hunding. See how far I get."
Let me untie you.

As he runs out of the building he'll say:

Mekag gro-Bug : "Word of advice. Don't let them capture you. If you can't get away, die fighting."

On the beach he'll say:

"I told you to get out. Glad you ignored me."

Once aboard The Spearhead, he'll say"

"The Spearhead's a good ship but she's no Maiden's Breath. At least she'll get us away from Stros M'Kai.
Looking forward to getting to know Lambur better. I like an Orc with a quick blade and a quicker tongue."

If you decided to destroy the relic:

"You did a hard thing, the right thing."

"Well now, look who it is. The hero of Betnikh.
I'd wondered if we'd see you again some day. Guess I was right. Lambur owes me dinner."

When you arrive at the docks, they will be swarming with undead. Mekag will be one of the people defending the ship.

He will have managed to survive the experience.

"That woman is incredible. She saved my life."
Who? Lambur?
"Dead man popped up behind me, out of the water. I didn't see it.
He would have ripped my throat out of Lambur hadn't speared him. Lifted him right up and tossed him back in the sea."
Sounds like you're lucky to be alive.
"Luck's got nothing to do with it. I'm alive because I've got Malacath's daughter at my back.
Now I owe her another dinner."

This Elder Scrolls Online-related article is a stub. You can help by expanding it.
Retrieved from "https://en.uesp.net/w/index.php?title=Online:Mekag_gro-Bug&oldid=2489826"
Categories:
Hidden categories: