Transmute Crystals (sometimes referred to as Transmutation Crystals) are a type of currency and 50 Transmute Crystals are used to change the traits of armor and weapons to a trait previously researched for that item, or to reconstruct a previously collected Item Set piece at a Transmute Station. Only 500 Transmute Crystals can be held at once per account (1,000 with ESO Plus), and they are bound to the account. If you acquire any crystals beyond the maximum, they will be wasted, so you should try and find a use for them if you have them.

Transmute Stations can be found in Clockwork City or purchased for your home as a crafting station through completion of Master Writs. A Transmute Station in a home, may be used by other players who you have granted access. 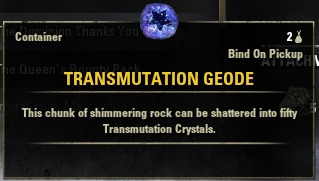 This Elder Scrolls Online-related article is a stub. You can help by expanding it.
Retrieved from "https://en.uesp.net/w/index.php?title=Online:Transmute_Crystals&oldid=2385536"
Category:
Hidden categories: