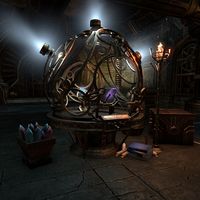 The Transmutate Station in the Brass Fortress

Transmute Stations are a type of crafting station that was introduced in Update 16 as part of the Clockwork City DLC. This crafting station has the ability to change an item's trait, for a cost of fifty Transmute Crystals.

Only one Transmute Station can be found in the world, at the Hall of Refined Techniques in the Clockwork City's Brass Fortress. However, stations can also be purchased as furnishing items from the Master Writ merchant for 00012501,250

and placed in player houses. As such, players without access to the Clockwork City DLC can still change traits via player housing.

Transmute Stations can also be used to reconstruct set pieces that are in your collection.