The UESPWiki – Your source for The Elder Scrolls since 1995
< Elder Scrolls Online: Quests: Ebonheart Pact / The Rift
Jump to: navigation, search

The Ebonheart Pact has come together under King Jorunn's command to battle the Worm Cult at the ruins of Honrich Tower.

On your way to Honrich Tower, you'll see Scout Fenrir along the road. He greets you, and tells you that King Jorunn is in the camp up the road. The Worm Cultists are preparing to advance.

The King is in the Ebonheart Pact camp near Honrich Tower's wayshrine, holding council with Hakra and Valdur. He tells you that the Worm Cult is summoning an army of Daedra at Honrich Tower. Thallik has Wuuthrad, and has roused the spirit of the ancient giant, Sinmur. He tells you to speak to Valdur before you attack the cult head-on.

Valdur vows to retrieve Wuuthrad, and says that Captain Hrosta will search for Wormfather while you close the portals. You must close four portals. If you have the Persuasion Perk, you can ask Valdur to give you a little bit of help. He will summon one of the Five Hundred Companions for you, since you have great need. You can choose a warrior, firemage or healer.

Valdur's spirit appears as you close the final portal, and tells you to come to the central ruin. A portal has been opened to Arcwind Point, where Thallik Wormfather has fled. Captain Hrosta followed Thallik through the portal with a small contingent of soldiers. Enter the portal and pursue them.

Arcwind Point is a snowy place, where you can barely make out the high arcing traditional Nordic structure in the distance. As you search for Captain Hrosta, you'll have to avoid a swath of murderous Daedra.

The captain is in the southern corner of this area. Go down the steps, then follow the left (south) path. You can sneak past most of the Daedra or walk further away from them, or you can choose to engage them in combat. Just be careful not to catch the attention of too many groups at once. 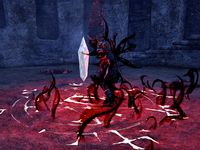 You'll find the captain near the entrance to a barrow similar to Taarengrav. This one is unique in that there is a strange white crystal with red runes beneath it sitting in front of the door. Talk to the captain near the door. She tells you that Thallik entered the ruins, but that you can't follow him. The door is warded, and the only way to be able to open it is to sacrifice a living soul at the crystal near the door.

The captain notes that she saw a Reachman in a cage back near the portal. At this point you can decide if you want to trick a prisoner into touching the crystal or allow the captain to sacrifice herself.

If you choose to trick a prisoner, climb the stairs out of the barrow and go north. You see Lesuin in a cage in the northeast corner of the map. He is a member of the tribe that attacked the Rift, and you can ask him why he was imprisoned. He claims the cultists imprisoned him because he refused to sacrifice a child who reminded him of his daughter. You can choose to lie to him and lead him to the crystal, or let him go home to his family (although this means the captain dies). If you let him go, he promises to live a good life.

Return to the crystal and observe the sacrifice. You can now enter the ruins. Continue through the first hallway to Sinmur's Tomb. 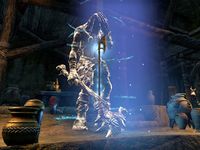 Inside the tomb, you will see Thallik and two Worm Cult Ritualists performing a ritual on the ghost of Sinmur. As you get closer, you can see Wuuthrad, glowing blue in front of Sinmur. Thallik is channeling energy through Wuuthrad into Sinmur. Defeat Thallik Wormfather and his minions.

After Thallik dies, his spirit appears and floats over to the upright sarcophagi on either side of the ritual. He casts a spell to awaken the Draugr Corpses slumbering within. After both of the draugr have been defeated, Thallik and Sinmur merge. Wuuthrad shatters, and Sinmur lets out a mighty roar before disappearing. Hakra and Valdur appear, but they are too late. Talk to Hakra.

You need to collect Wuuthrad's haft, then return to Honrich Tower through the portal. Talk to King Jorunn, who is just south of where you land. Despite the fact that Sinmur escaped, Jorunn thanks you for defeating Thallik Wormfather. Your actions here have severely weakened the Worm Cult.