The UESPWiki – Your source for The Elder Scrolls since 1995
< Elder Scrolls Online: Places: The Rift / Ruins / Quest Hubs
Jump to: navigation, search 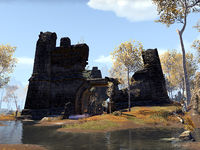 Honrich Tower is a ruined lakeside tower in the central Rift, southeast of Nimalten. The Ebonheart Pact has set up camp south of the tower. A cooking fire can be found south of King Jorunn's tent. The lore book, Unexpected Allies, can be found on a table in the Shadowscales's tent within the Pact camp.

A portal to Arcwind Point opens in the central ruin during the objective quest. 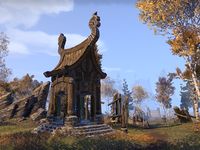 The Honrich Tower Wayshrine is located just southeast of the tower.

This Elder Scrolls Online-related article is a stub. You can help by expanding it.
Retrieved from "https://en.uesp.net/w/index.php?title=Online:Honrich_Tower&oldid=2359339"
Categories:
Hidden categories: