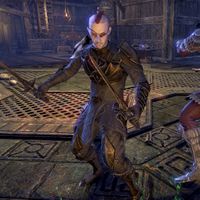 Pentarch Khorb is a Nord vampire who assassinated Queen Gerhyld on the orders of the Ashen Lord. He is identified by his eyepatch and his bloody trail follows him from Solitude to Blackreach. He can be confronted in the Kagnthamz ruins.

After you have Old Mjolen perform a divination on the amulet Khorb lost after his flight from the palace, you will be able to track him magically. It first leads you and Fennorian to an unfortunate hunter's camp and then the Chillwind Depths cavern. When you enter the his hideout, you will interrupt his attack on Fennorian and the assassin will flee through a passage.

Once he's gone you can check the documents he left around the camp. They will lead you to the Silversnow Mine which is an entrance to the Dusktown Cavern in Blackreach. After you and Lyris prevent a harrowstorm ritual being performed on Dusktown, Fennorian will report that he saw the assassin and a coven witch flee into the nearby Kagnthamz. Pentarch Khorb can be found in a chamber full of comatose or dead commoners where he is draining them to heal himself.

Lyris Titanborn: "An eye patch! That's the assassin!"
Pentarch Khorb: "Don't you ever give up the chase?" 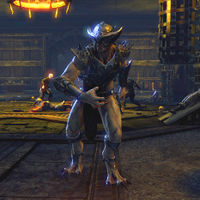 During the fight, Harrowfiends and Death Hounds will join in. Midway through the battle, his body will shift and change.

He will transform into a monstrous creature and his wounds will have healed.