"You've got no more chance than a child at night in Nisin Cave." — Old Saying in Vlastarus 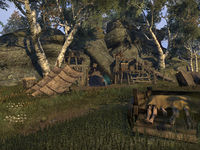 Nisin Cave is a cave in southwestern Cyrodiil, north of Castle Black Boot, featuring a sunken Daedric ruin. The cave contains Shadowed Path necromancers, Dremora, skeletons and wisps. A chest can be found around the exterior of the cave, to the east, behind the mountain. Mushrooms grow within the cave.

The first room contains an altar where a Shadowed Path Defiler performs a ritual on a skeletal corpse. A heavy sack can be found at the end of the entrance tunnel, beside a crate. A chest can be found in the tunnel leading to the next chamber, in front of where Volgo the Harrower stands.

A shrine to Boethiah can be found in the westernmost chamber. Here, you can fight Barasatii, a Dremora fire mage who is associated with the related quest. The delve's skyshard lies atop a large boulder in the southern portion of the chamber. A chest is located behind the western pillar in this room, near the tunnel where Volgo lies. 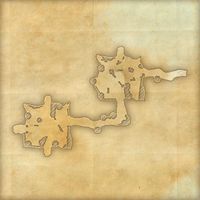 A map of Nisin Cave