The UESPWiki – Your source for The Elder Scrolls since 1995
< Elder Scrolls Online: Mounts: Equines / L
Jump to: navigation, search

By forcing their steeds to consume the Blood of Coldharbour, the traitorous soldiers of Legion Zero created a war horse unlike any other. Adorned with fearsome barding and their sullen red colors, this is truly a mount to be feared. 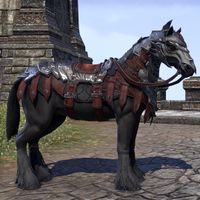 . It is now available as a Legendary-level reward in Ayleid crates. Its default name is "Imperator".

The Legion Zero Destrier has black fur and grey eyes. The horse's legs are muscular, and it has long fetlocks growing over its hooves. Even with no upgrades, this horse is equipped with full barding. Belonging to Legion Zero, the armor consists of a red leather caparison in an Imperial-style, hearkening back to its masters' origin as an offshoot of the Imperial Legion. Daedric influence is present in the dark metal plates that overlap each other atop the caparison. The dark metal is embellished with silver curlicues similar to those found in the Coldharbour Dremora's chest pieces, which represent the flow of chaotic creatia.

A dark metal chanfron protects its head. The snout is designed to resemble a horse's skull, and spiked cheek plates serve to further protect the side of the face. With stamina upgrades, the snout is embellished with sharp teeth and an upper-jawed grimace, while the cheek plates are adorned with curved, ridged horns resembling Molag Bal's.

The metal portion of the armor is primarily located on the horse's back, with plates comprising the criniere leading down to the saddle and ending at the flank. The horse's chest is equipped with a protective peytral, which has three small, front-facing spikes central to the chest. On a character with speed upgrades, the horse has shinboots fitted with greaves. When inventory upgrades are present, black and red leather satchels hang from the horse's flanks.