The UESPWiki – Your source for The Elder Scrolls since 1995
< Elder Scrolls Online: Events(Redirected from Online:Midyear Mayhem)
Jump to: navigation, search 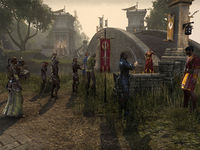 Whitestrake's Mayhem (previously called Midyear Mayhem) is a holiday event that typically takes place twice a year, initially around July (thus the name) and again in January. The event is a celebration of Pelinal Whitestrake's victory against the Ayleids in a pivotal conflict known as Pelinal's Midyear Massacre. As such, the event is themed around PvP in Cyrodiil.

The festival also has a special quest associated with it, also named Midyear Mayhem. Upon completing this quest, you will receive the Scroll of Pelinal's Ferocity, a reusable item which doubles Alliance Points gained for two hours. You can obtain a new scroll each time by completing the quest again, although if you lose the item mid-event you can purchase more from Predicant Maera. Another notable feature of the event is the inclusion of Pelinal's Midyear Boon Box, which has a chance to contain Transmute Crystals, PvP consumables, Alliance Motif chapters, Akaviri style items, Prismatic Runestones, Reagents, and Songs of Pelinal book furnishings. Details on the Midyear Mayhem, which begins the related quest, can be found at Gladiator's Quarters throughout Tamriel

Midyear Mayhem took place in February 2022 and was renamed Whitestrake’s Mayhem. In addition to the rewards from previous events, it introduced several new items. Pelinal's Boon Boxes are rewarded for completing daily quests in Cyrodiil or the Imperial City, or as a bonus reward with Rewards for the Worthy mails you receive.

You can earn a total of 3 Event Tickets per day during this event.

A second Midyear Mahyem event took place from June 24 to July 6, 2021. It introduced the third and final fragment of the Deadlands Firewalker Personality, the Vial of Scalding Daedric Brew. The other five fragments will also be available from the Impresario. It also introduced the Alliance Banner-Bearer Style for alliance-themed staves and shields.

Battle in the Alliance War, Battlegrounds, and Imperial City during the Midyear Mayhem PvP event and you’ll earn bonus XP, collectibles, and more!

The first Midyear Mayhem of the year took place from January 28 to February 9, 2021. In addition to the rewards from previous Midyear Mayhems, the new Ebonsteel Knight armor style pages have been introduced. Pages have a chance to drop from bosses in the Imperial City, but are also available from the Impresario for 00000055

each. The corresponding weapon styles are only available from the Crown Store by purchasing the limited time Ebonsteel Knight Arms Pack during this event.

The inaugural Midyear Mayhem event ran from July 20 to July 31, 2017. Alongside Midyear Boon Boxes, this event introduced a new collectible hat, the Midyear Victor's Laurel Wreath, and the "Star-Made Knight" title which could be earned by completing all the achievements associated with the event.

Notably, both the Imperial City DLC and the Morrowind Chapter were needed this year to complete all ten event achievements and earn your victor's laurel.

The following items are typically sold in the Crown Store around Midyear Mayhem: