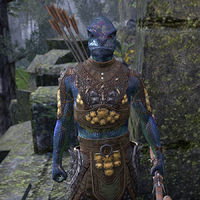 Guhcin is a Naga hunter of the Dead-Water Tribe who can be found in Dead-Water Village. He is one of the Naga you rescued from the Blackguard Caravan during Missing in Murkmire and thus recognizes you when you come to ask him questions about the Skin Taker.

Afterwards, he makes the decision to visit the Bright-Throat Village and learn their ways.

When you go to Dead-Water village, you can find him near Nisswo Uaxal. He can then be asked about his encounter with the Skin-Taker, who he saw as a coward.

Either way, you can tell him:

I'm searching for the Skin Taker. Sulosya says you chased them off.
"Would that I had killed her. When I was captured, one of the Blackguards seared my leg with a hot poker to prevent my escape. It remains difficult to run."
So the killer's a woman? Did you get a good look at her?

He will answer in two different ways:

How are you recovering?

"They did not take my eyes or hands, so I am still of some use.
Dead-Water are no strangers to pain. Our medicines are strong. I will recover."

Who was the victim you found?

"Not one of ours. That's all I can say for certain. We await members of the other tribes to account for their missing. With the body lost to the Dead-Water pool, there is little else to be done."

If the Skin Taker is a Blackguard, she might not be working alone.

"A possibility. The Blackguards have sent brutal messages in the past, but they were clear with their intentions. This Skin Taker has kept her identity in shadow."

Once you have dealt with the Skin Taker, you can return to the village to tell Guhcin the news. He will now be in the center of the village along with Dajaleen. What he'll say depends on the identity of the Skin Taker. If it was the young Julitta, he will at first be elated by the news but then have second thoughts when he learns it was a fellow tribe members actions which motivated the Skin Taker.

"You return. There has been no news of the Skin Taker.
What of your hunt?"
I found the Skin Taker. She won't hurt anyone again.
"I had faith that you would. What honorless toad did this? Whose kin shall we seek in retaliation?"
The Skin Taker had no kin left.
"Then their muddied line will trouble us no more. End a battle with finality and you need only fight it once."
These killings were in retaliation for Jaxsik executing her mother.
"We are not accustomed to considering the concerns of others. Something we must look to the Bright-Throats to learn. We will never be so unguarded, but tempering our strategy with restraint may be a boon.
The lesson is appreciated."

Afterwards, he will state his plans, "I may spend my recovery among the Bright-Throats. Observe them."

However, if the Skin Taker is someone you have met before, he will instead say:

"You return. There has been no new sightings of the Skin Taker since we last spoke.
Though this Bright-Throat woman arrived. She was asking for you."