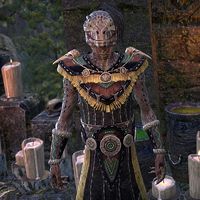 Nisswo Uaxal is an Argonian and travelling nisswo of Sithis, who can be found in Dead-Water Village. He shows his devotion to Sithis through his art and is looking for assistance for his latest project.

He can be found in north-western section of the village.

"To honor change is to honor Sithis. All Saxhleel know this, but sometimes it is forgotten. As nisswo, it lies upon my shoulders to remind them.
Would you help me in this endeavor?"
What do you need me to do?
"I wish to create a monument dedicated to the forces of change and chaos. I will take that which time has broken, and create it anew in the name of Sithis.
That is where your aid comes in."
What exactly do you need?
"You must travel to echoes of our past: Tsofeer Cavern, the Teeth of Sithis, and the Tomb of Many Spears. There, you will gather pieces from our Days of Stone-Nests.
When all is collected, then I shall create."
All right, I'll collect pieces of ruins for your art piece.

He can then be further questioned for more information.

"The beauty of change is undeniable. The crumbling stone of our foolish past. The sky bleeding red above a setting sun. The bloated face of a corpse as the skin begins to decay.
Ah, to gaze upon such wonder." (Questions can be found under (Teachings about Sithis and the Nisswo futher down the page.)

Once you have found the pieces of the rubble, you can return to Nisswo Uaxal.

"Have you come with the crumbling stones of our folly?"
I've collected the ruin pieces, if that's what you mean.
"Precisely! These ruins represent old, foolhardy beliefs. Our people thought to be stone; immovable, unchangeable. They shielded themselves from the gift of Sithis.
Only from the blindness of the past can I make a vision for the present."
So you're going to create art from the rubble?
"No, far more than art! An offering. Once, we feared that which Sithis whispered. Now our tongues shall speak the words.
Quickly, grab a hammer from the storehouse!"
I'll collect your hammer.
"Quickly then! Go collect that which is needed." 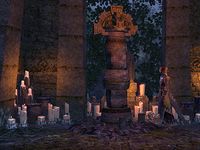 When you have found the hammer and returned, Nisswo Uaxal will have already made a stone artwork out of the rubble. When he sees you he will immediately ask you to destroy it with the hammer.

Nisswo Uaxal: "You've returned! Now it is time to destroy that which has been created. Quickly, smash the monument with your hammer!"

You have the option to asked him why:

"Why do you hesitate? We must do before we can undo!"
Why are you asking me to destroy your artwork?
"Sithis is both beginning and end. The cycle which devours all, only to create it anew. So too must it be with this monument."
Why destroy it so quickly, though?
"That which must change, will change. Hesitation only leads to stagnation, which disregards the will of Sithis.
Do not falter! Strike now, quickly and true!"

Once it has been destroyed you can ask him about a reward:

Teachings about Sithis and the Nisswo[edit]

Before and after the quest is completed, he can be asked more questions about Sithis and his religion.

"Have you any other questions for me? I am honor-bound to answer all who wish to learn of Sithis."

How does creating art honor Sithis?
"Tell me this: what is painted upon a blank canvas?"

Tell me about your role as nisswo./So the priests of Sithis all believe different things?
"I belong to the Clutch of Nisswo, a fellowship of sorts.
In the dryskin tongue we would be called "nothing-speakers," for we speak the words of that which is void. Though we do not all speak the same words, of course. Why would we?"

You don't all speak the same words?
"Sithis is a being of multitude. It is the will of change, the force of chaos, the lust for bloodshed. Its words are many, and so the nisswo are many.
But we all speak parts of the larger truth."

Meaning …?
"Perhaps an example will help. I honor Sithis through my art. I see the something within the nothing, and create it. Through my actions a lesson is learned.
My mentor had a different approach. She would require offerings of blood."

Offerings of blood?
"The greater the offering, the greater the honor. Some would sacrifice a scale or a fang, freshly plucked and bloodied. Others would offer fingers or the tips of their tails.
One follower offered his heart. He died, of course."

How do you become a nisswo?
"One must simply be accepted as a voh-vastei. An apprentice, in the dryskin tongue.
I journeyed with my mentor for many seasons before she bestowed the title of nisswo upon me. Then I journeyed alone, spreading the dark word to many tribes."

Why travel? Why not stay in one village?
"I speak but one truth.
Through many seasons, this village will hear many words. It is from these many words that they will create their own truth. And though these truths will be different, they will all be, in the end, true."

Seems like a complicated away to spread a religion.
"The Saxhleel do not require ease in our beliefs. We do not write words upon a page and request our followers to speak its unmoving words.
Belief should be questioned. Doubted. Judged and finally accepted. Only then is it truth."

Tell me about Sithis. (Appears once "Art of the Nisswo" is completed.)
"Before creation, there was void. Nothing. But even nothing must change.
Sithis sundered the nothing, creating the possibilities of something. These ideas bloomed and faded, as all things should. As all things shall."

Why do the Argonians worship Sithis?
"We worship the change which it wills to be!
Once, we thought to shield ourselves from this blessing by becoming stone. We built monuments to Sithis, not out of reverence, but out of fear. "Do no change us!" we cried. "Do not let us die!""

And that's why you had me destroy the monument?
"I wished to transform the echoes of our past follies into our serene reverence of today. But, one day, that too will change. Our belief, our culture, our people. All will change, for it must change.
And then all will be nothing once more."

Nisswo Uaxal can be found in the Root-Whisper Village's ruins near the Vakka-Bok Xanmeer, being one of the many to witness the reawakening of a Hist tree.

"I see you have taken the dark words of Sithis into your heart, Rootmender.
From the nothing of slumber has come something awakened. One day it will be nothing once more, of course. But that is not this day. Well, probably not this day."
How are you, Nisswo?
"At the moment? I am pleased by your actions.
That will change of course, as all things must change. But for now, I shall bask in the pleasure of your company, like the carrion bird basks in the sun after filling its belly with decaying meats."
All right. Are you still staying in the Dead-Water Village?
"Oh, yes. The Naga have many traditions, and so it will take many words for their hearts to accept the change that must be.
Perhaps your actions here today will help them see that."
Perhaps. Take care, Nisswo.
"May the ways of Sithis guide your path, Rootmender."