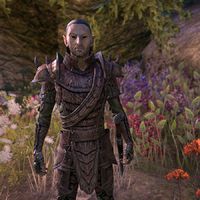 Fingaenion is a Bosmer and the husband of Gilraen. In City of Ash I, he is one of the few survivors of the Daedra's first attack, thanks to Laeneval saving him. He will later return to Whisper Grove in City of Ash II to rescue his wife and the Undaunted he hired to save her.

At the central barricade, he will lay unconscious:

<Ragged breathing is the only sound coming from this Bosmer.>

After you complete the quest, Mehrunes Dagon speaks to Gilraen:

Mehrunes Dagon: "I'm beside myself. You truly believe you've won. I didn't expect your little friends there could kill Erthas. But I stand corrected. All this trouble because of one Bosmeri woman. You are Gilraen, of the Whisper Grove, are you not?"
Gilraen: "I am. Are you … Mehrunes Dagon?"
Mehrunes Dagon: "It was you who rallied this peasant village to contend with me. Fascinating that a mortal could be so troublesome. I need a replacement for your Erthas. Come. Meet with me, and I will close this Oblivion gate, spare your people."
Gilraen: "I think … I think I have little choice. Tell the others to get as far away from here as they can."

She runs into the gate, and it closes behind her. Fingaenion arrives moments later:

Fingaenion: "What's happened here? Where is Gilraen? Spread out and search for her."

You can speak to him after:

"My wife—where is my wife? Where is Gilraen?"
Gilraen agreed to meet with Mehrunes Dagon in exchange for closing the Oblivion Gate.
"She … she left me? She always did put the needs of the community above her family. I suppose I'll have to respect her wishes. And she'll have to respect that I'll tear down the fabric of reality to get her back."
What will you do?
"Our home here won't last. Not with the damage that's been done. Gilraen would want me to get everyone to safety. I'll return them to the Dominion—maybe they can help me get my wife back.
Think I saw a copy of "On Oblivion" at home …."

When you return the area, you will find that it has returned to a lush forest. However, things are amiss and can ask Fingaenion what has happened after you rescue him from some Senche-Tigers. He will jump down from the tree and comment, "Shoo! Go play with a Khajiit or something!" Talk to him to see what has happened:

Asking questions after agreeing to help:

"There are Daedra lurking ahead—if you can defeat them, we can get through! Save my wife and those mercenaries I hired. Whatever's left of them. I mean—you know what I mean.
Go on, I'll catch up. I need a moment."
Why did you think this was a good idea?

"I woke screaming every night, from dreams of my wife in the clutches of Dagon cultists—of those Daedra who stepped from that Gate to burn us to the ground.
My wife saved our neighbors, saved me. And there was no one left to save her. I had to try."

You mentioned sellswords. Are they Fighters Guild?

"I lost everything after the attack. The Fighters Guild was beyond my means.
This group call themselves "the Undaunted," and they were willing to fight for cheap. "For the thrills," they said. I thought they looked brutish enough to fight Daedra."
Do you think they're still alive?
"I hope so. I brought a small army of them.
I imagined they would be enough to handle whatever came through that Gate, but apparently I'm not great at planning journeys to Oblivion."

What happened to the other villagers since I was last here?

"The village is gone, and my friends with it. Gilraen is all I have left.
I forget that you've never seen Whisper Grove as it was—I suppose you'll always remember it as a city of ash. It was beautiful when it was here."

If you have completed the quest previously, then he will say the following instead if spoken to:

When you reach the Inner Grove, he will have arrived before you an can be found looking down at the portal.

Fingaenion "Be careful! The Gate's been open for some time. The forest is probably crawling with Daedra!"

"I apologize—I really shouldn't have run ahead. This whole ordeal has been very stressful for me.
I won't do it again."

When you reach the gate to the Deadlands, you will find it guarded by a trio of Dremora:

Akezel: "They opened the Gate? Are mortals naturally daft?"
Marruz: "You would not say that of the one who challenges us. It learned our ways."
Rukhan: "It has the Lord's favor. Do you see what it wears on its belt? If it truly wants to impress us, it should not cheat."

Fingaenion "There you are! The gate is just up ahead. Those three in front of it look … formidable."

Once they are dead you can enter The Knives of Discord. Fingaenion will enter before you:

By the time you find him in the daedric buildings, you will find him locked in a cage by Urata the Legion. However, Gilraen will have also arrived though she is shocked and annoyed that he is here. Once Urata is dead, she'll unlock the cage and he is happy to see her but he quickly sees that she has changed.

Fingaenion: "Gilraen! You look—are you all right?"
Fingaenion: "What did they do to you?"
Gilraen: "Never mind that. How about you try not getting yourself killed? The Valkyn and his pet Titan—we're going to slay them before they do the same to us."

Talking with him here:

"A shame your kind doesn't fall from trees. With twelve of you, we'd accomplish wonders!
According to Gilraen, the way out is forward. My books told me how to get in, but I—I thought we could go back the way we came. I was so wrong. About so much."

Continuing through the Deadlands you will get your first sighting of Valkyn Skoria. Meanwhile, Gilraen casually brings up what is happening to your fellow Undaunted:

'Valkyn Skoria: "I will see to it the Golden Flame erases you."
Gilraen: "The Daedroth are fighting over your friends' souls. If we're lucky, they'll keep it up."
Fingaenion: "You don't even sound like that bothers you! We have to help them."

When you reach Horvantud the Fire Maw, Fingaenion will call out:

Fingaenion: "What now? We can't get past that thing."

Once you beat the Fire Maw, Gilraen and Fingaenion will catch up with the Undaunted group's leader:

Gilraen: "Seems Fingaenion's new friends aren't as meek as you lot. And you call yourselves "Undaunted.""
Zantan the Magnificent: "Quiet, you! It's been a bad day!"

As you run through the stone corridors, you can overhear Fingaenion and Gilraen talk:

Past the Ash Titan, you need to meet up with Fingaenion and Gilraen, they will be waiting for you on the walkway leading to Valkyn Skoria:

Fingaenion: "You're here! Let's go. We have to destroy the Sigil Stone in order to close the Oblivion Gate for good. Gilraen says the Valkyn Skoria guards it."

But first the bridge will need to be lowered, which means disabling the ritual sites to unlock the way:

"Once both ritual sites on either side are disabled, we'll be able to make it across. Or so Gilraen tells me.
Split up if you have to."

Once you have created the bridge, Fingaenion will call out:

Fingaenion: You did it, the bridge is assembling!"

Gilraen: "I'll distract him. Fingaenion, you stay here!"
Fingaenion: "Gilraen, don't you dare die on me now! Be careful!"
<Valkyn Skoria hurts Fingaenions [verification needed — see talk page]:
Valkyn Skoria: "You don't have to come down here for me to hurt you."
Gilraen: "No! Fingaenion!"
Gilraen: "Tear his heart out! I'll tend to my husband."

Once you have defeated Valkyn Skoria and entered the Red-Zeal Keep, Gilraen will arrive with Fingaenion and will run down the corridor. At the end of the hall is the Sigil Stone.

Talking with him before breaking the stone:

"According to everything I've read, breaking that Sigil Stone up ahead will bring us, and everyone who came through that Gate, back to Whisper Grove."

Once you return back to Whisper Grove in Greenshade, Fingaenion and Gilraen along with a group of surviving undaunted.

Gilraen: "I never expected to be back. Oblivion had become home."
Fingaenion: "We can go anywhere you want. Just say the word."
Gilraen: "We were involved in the death of a Valkyn. This ordeal may not be over, Fin."
<Gilraen walks off for a moment.>
Fingaenion: "Try to put it out of your mind. We won't be near any Oblivion Gates for a while."

Talk with him to complete the quest:

"You turned the tide for us, my friend. I was sure we were done for at least a dozen times today."
Seems like we made it.
"I thank you, my friend. From the bottom of my soul, I thank you. I don't care where we go, or what we do. What you've given back to me is priceless."

Talking with him here:

"I don't know what's next for us, but I know this—it's going to be better than Oblivion. I wish Gilraen would stop worrying."

There is one achievement associated with this person:

This Elder Scrolls Online-related article is a stub. You can help by expanding it.
Retrieved from "https://en.uesp.net/w/index.php?title=Online:Fingaenion&oldid=2398006"
Categories:
Hidden categories: